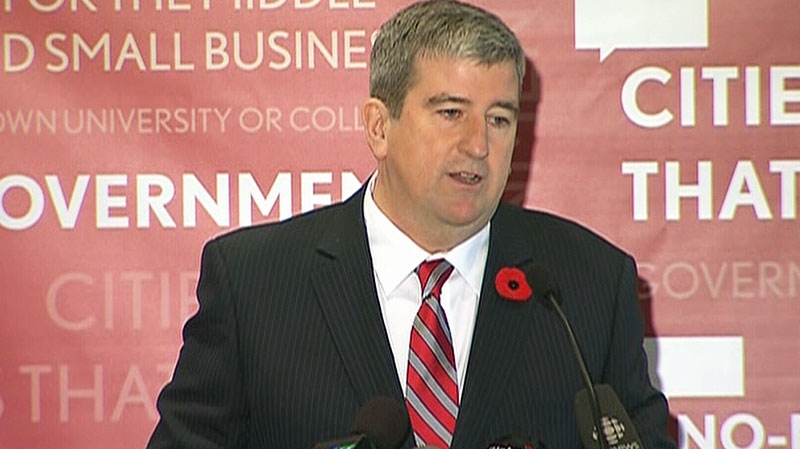 Former Ontario cabinet minister Glen Murray announces his candidacy for the leadership of the Ontario Liberal Party in Toronto on Sunday, Nov. 4, 2012.

TORONTO -- One of the candidates to replace Ontario Premier Dalton McGuinty dropped out of the race Thursday, throwing his support behind former education minister Kathleen Wynne.

"I think the best chance for the renewal I want to see in Ontario and in the party, and the person who is better able to get us there than I am, is my friend Kathleen Wynne," Glen Murray told cheering Wynne supporters.

"And because I believe that renewal is more important than anything else, and because I simply believe she is the best person to be premier of Ontario, she has my full and unqualified support."

Murray's decision, which comes just days before Liberal delegates are selected for the leadership convention, leaves six candidates in the race, but he felt strongly that he had raised important ideas during the past few months.

"I started down this path because I wanted to bring a sense of renewal, new energy, new ideas and new people, but I've always said you have to pause in life sometimes to never put your own political career ahead of ideas and public service," he said

"While I'm proud of my team and the efforts we've made, it's very clear to me that Kathleen Wynne embodies much of the ideas, compatible values and incredible capacity to bring people together and to lead, a woman who's not afraid to make tough decisions.

Wynne called Murray "a class act," and said he would play a "senior role" in her cabinet if she becomes premier.

"I know this is a very hard moment for you, because you've put your heart and soul into this, and I'm very grateful that you're coming and we're going to be able to work together," said Wynne.

"I need his ideas and Glen brings fantastic imagination and experience that I need on my team."

Murray, the former mayor of Winnipeg, joked about his inability to drum up financial and delegate support during Wednesday night's final debate among the leadership candidates.

He admitted he didn't have a lot of money -- had "tapped out every friend" -- and could barely afford another campaign pamphlet.

Murray, who was fist elected in a 2010 byelection in Toronto-Centre, had virtually no support among his fellow Liberal caucus members and little among would-be delegates to the leadership convention in Toronto Jan. 25-26.

The 55-year-old Murray had held two portfolios in McGuinty's cabinet -- minister of colleges and universities and minister of research and innovation.