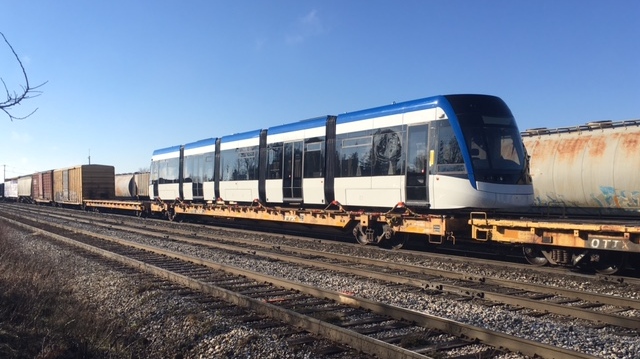 The remaining two vehicles for the ION Rapid Transit System have arrived in Waterloo Region.

Last week, Bombardier announced that the vehicles had shipped from its Kingston facility and would arrive within a week.

On Sunday, that promise was realized as the last vehicles arrived by train.

The region says it is still targeting LRT service to begin in spring of 2019.

Bombardier is confident in having 14 cars retrofitted by year’s end and are even sending more employees to Waterloo to equip the remaining trains.

“We have over 100 employees in Ontario who are working around the clock to meet this deadline,” says Jade St-Jean, a spokesperson for Bombardier Transportation.

Thomas Schmidt, the Commissioner of Transportation and Environmental Services at the Region of Waterloo, isn’t as confident.

“We don’t have any vehicles at a preliminary acceptance level. There’s only five or six weeks left in this year so I think it is going to be difficult to meet that requirement,” he says.

The region says it will seek to recover any additional costs incurred as a result of the delays in delivery from Bombardier.