The two people who died in hospital after a crash on Highway 401 Monday were Chinese international students at King’s University College in London, Ont., the school says.

In a statement issued Tuesday, King’s University College said two other students, also from China, were injured in the collision between a minivan and a pickup truck near Kitchener, Ont. One remains in serious condition. The other has more minor injuries.

The school said it is not releasing the names of the dead at this time out of respect for the families. Both were first-year social science students.

“There were four King’s students and one Western student in the vehicle. We contacted the families of the three seriously injured students and the one fatality. Then early this morning, we learned there was a second fatality,” King’s President David Malloy told CTV News on Tuesday.

Malloy said the fatal crash happened on the first day of King’s University College reading week. He added that he believed the students were heading to Toronto to do some shopping.

"The two students who passed away were first-year social science students. As I understand, they had a bright future ahead of them at King’s,” Malloy said.

“This is a great shock and tragedy for King’s and for the wider Western University community. These were people devoted to studying in Canada. We are deeply saddened and our sympathies are for the families and friends of all those who are impacted by this tragedy,” Malloy said.

Emergency crews were called to the crash involving a pickup truck and a minivan just west of Trussler Road around 10:30 a.m. Monday. 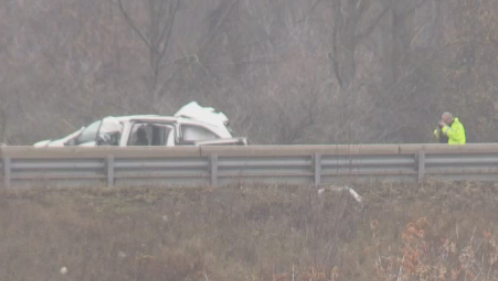 King’s University College said flags at the school have been lowered to half mast and Malloy said the university is working on a larger more collective event on campus.

“We are also working with the Canadian government and embassies to expedite any travel requirements for the families to get here from China as quickly as possible,” Malloy said.

A 17 km stretch of Highway 401 eastbound was closed for six hours Monday as investigators and reconstructionists attended the crash scene.

Counselling services, including those in Mandarin, are available for students at King’s University College.

Correction: This story has been updated to reflect a changing information from Ontario Provincial Police (OPP). At 1:57 p.m. Monday, OPP said two people had died following the crash. In an update at 3:08 p.m., OPP corrected that statement saying life-saving efforts were successful and the pair were in life-threatening condition. On Tuesday, OPP said two people died of their injuries in hospital.