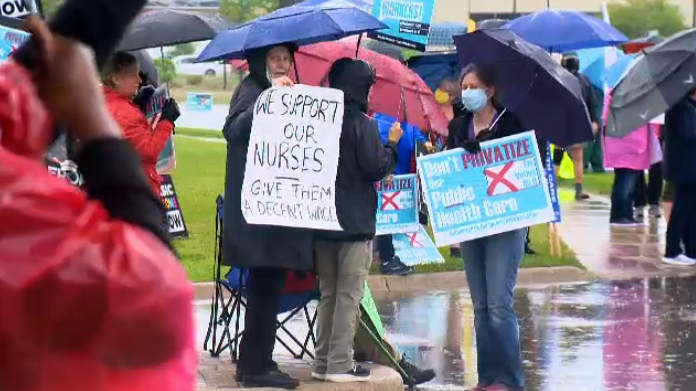 Demonstrators line the entrance to Bingeman's in Kitchener ahead of Doug Ford's campaign rally inside the venue on May 27, 2022. (CTV Kitchener)

“It's time to paint Kitchener-Waterloo blue in '22. So on June 2, everybody let's do it, let's get it done and God bless the people of Ontario,” Ford told supporters.

As Ford made his pitch to voters inside, outside, demonstrators weathered rain and thunder to speak out against his leadership.

“When I started teaching right after Mike Harris, I taught kindergarten, so my first year I had 27 kids,” said teacher Jennifer Garneau Duncan. “Then the next year, when the Liberals came in, they were down to 20. Now it’s back up to 27, which is an insane amount for kindergarten.”

Educators were one of several groups – each advocating for their own priorities and interests – that lined the entrance to Bingeman’s ahead of Ford’s rally.

Other demonstrators carried signs with references to the environment, healthcare and housing.

Some of the messages targeted protections for drinking water and trees, capping class sizes, creating a greater supply of affordable housing and protecting public healthcare.

Many placards were aimed at repealing Bill 124, which limits wage increases for public-sector workers, including nurses.

Members of the Ontario Nurses Association (ONA) made up the largest portion of demonstrators hoping to get their message across to Ford on Friday.

“We‘re here to show him… we need help. Registered nurses in this province are beyond the breaking point. We are at the point of collapse now,” said Erin Ariss with the ONA.

“We need to see his oppressive wage legislation repealed. Beyond that, we need to have a sustainable workforce with manageable workload, Ontario is 30,000 RNs short.”

The Ontario election is June 2.