A Guelph man received a plant as a family heirloom last month but, when it started to bloom, it was hard to stomach the strong stench.

“The smell is kind of comparable to either a dead animal, rotting milk or rotting meat,” said Andrew Nascimben.

The gift was a plant with the species name Amorphophallus konjac. The konjac has many morbid nicknames like Devil’s tongue, voodoo lily and corpse flower due to its unique, bold colour and structure.

Nascimben’s grandfather took care of the plant for decades before passing it onto him.

There are a few konjacs in the greenhouse at McMaster University. Staff said the plants have become somewhat of an attraction, with many people curious to see and smell the flower when it is in bloom, which is when it is at its smelliest.

A biology professor at the university said the reason the plant produces such a foul scent is to attract flies.

“The plant is deliberately making it. It will actually speed up your metabolism in the flowers when it’s shedding pollen and heat up,” Susan Dudley said. 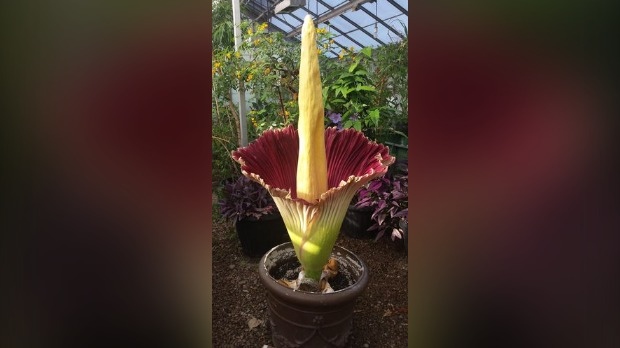 The corpse flower has also been spotted at the University of Waterloo.

“There’s less than 1,000 of these plans left in the native habitats, so making it even more rare of a plant to have,” said Simon Chuong, a biology professor at UW

The Nascimbens named their flower Nadja. It has now been moved upstairs after being banished to the basement for being too smelly. 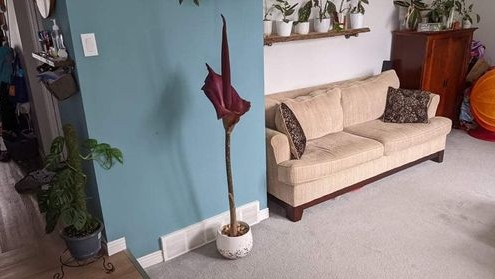 “It was down there for about two or three days and then the smell subsided so we brought back it back up to the living room,” Nascimben said.

Nascimben said the plan is to plant it outside in the spring and try to keep it alive for another 50 years or for however long his daughters can stand to be near the pungent plant.

“Keep it in family. Keep the tradition going,” said Nascimben.

'I just pray that they are going to be fine': Witnesses recall violent shooting at B.C. bank

Witnesses recount what they saw after police officers engaged in a shooting with armed suspects at a bank in Saanich, B.C., on Tuesday morning. Two suspects are dead and six officers are in hospital with gunshot wounds.

Donald Trump rebuffed his own security's warnings about armed protesters in the Jan. 6 rally crowd and made desperate attempts to join his supporters as they marched to the Capitol, according to dramatic new testimony Tuesday before the House committee investigating the 2021 insurrection.

Airbnb has codified a global policy that prohibits guests from hosting parties or events on all listed properties.