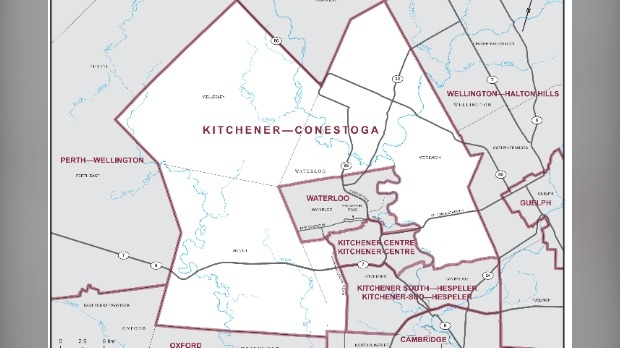 The Kitchener-Conestoga riding is in for another nail-biter of a finish. (Source: Elections Canada)

KITCHENER – A clerical error stalled the results in one of Canada's closest races, Elections Canada says.

As of 3:55 a.m. Tuesday, the numbers from five polls in Kitchener-Conestoga were still outstanding, with Liberal candidate Tim Louis leading over Conservative candidate Harold Albrecht by 273 votes.

In a race that has seen the pair separated by as few as six votes, those last five polls mattered a lot.

This isn't the first close call of an election in Kitchener Conestoga. Harold Albrecht has held the seat since 2006, but in the 2015 election, he got the win over Tim Louis by fewer than 300 votes.

Elections Canada has checks and balances to ensure the integrity of the election.

The votes from the five outstanding polls were put into a sealed box. There was a piece of paper that goes along with the results box called the statement of vote.

"We need that piece of paper, the statement of vote, because we're not allowed to open the boxes," explains a spokesperson for Elections Canada.

"Those boxes are returned from the polling station to the returning office, they're sealed.  And we are not allowed to open it until another process kicks in, it's called the validation process."

The validation of the results starts on Wednesday morning, so that would have been the latest that the results were announced.

It's not yet known whether Elections Canada found the statement of votes or not.