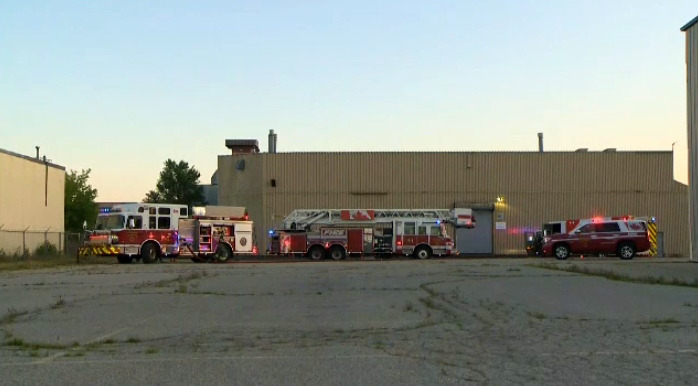 Firetrucks are seen at a warehouse on Borden Street in Kitchener on Wednesday July 14, 2022. (Dan Lauckner/CTV Kitchener)

A fire at a warehouse on Borden Street in Kitchener brought out more than a dozen firefighters on Wednesday night.

Emergency services responded to the area around 8 p.m.

Witnesses told CTV News thick smoke could be seen from a few blocks away at one point.

A fire official on scene said the building was vacant and the fire is not considered suspicious.

On Wednesday morning, Waterloo regional police said the cause of the fire is still under investigation and no injuries were reported.

Russian President Vladimir Putin signed treaties Friday for an illegal annexation of occupied Ukrainian territory in a sharp escalation of his seven-month invasion of Ukraine. Its leader immediately countered with a surprise application to join the NATO military alliance.

Ceremonies, marches and other gatherings are taking place across the country today as communities mark the National Day of Truth and Reconciliation.

Memphis teacher Eliza Fletcher died from a gunshot wound to the back of her head, autopsy reveals

Eliza Fletcher, the Memphis teacher who was abducted while on an early morning jog earlier this month, died from a gunshot wound to the back of her head and blunt force injury, according to an autopsy report.