At over 300 years old, this Kitchener tree has lived through history

At over 300 years old, this Kitchener tree has lived through history

An Elm tree that has stood in Kitchener for over 300 years is coming down after being infected with Dutch elm disease earlier this year.

The tree stood beside local private school Scholars' Hall, with director Fred Gore saying the University of Guelph did a tree coring and determined it was 307 years old back in 2000.

This means it is estimated the tree sprouted in 1693, well before Canada gained independence and the Region of Waterloo was created.

When the felling of the tree began on Wednesday, the tree would have been 329 years old based on the U of G coring study. 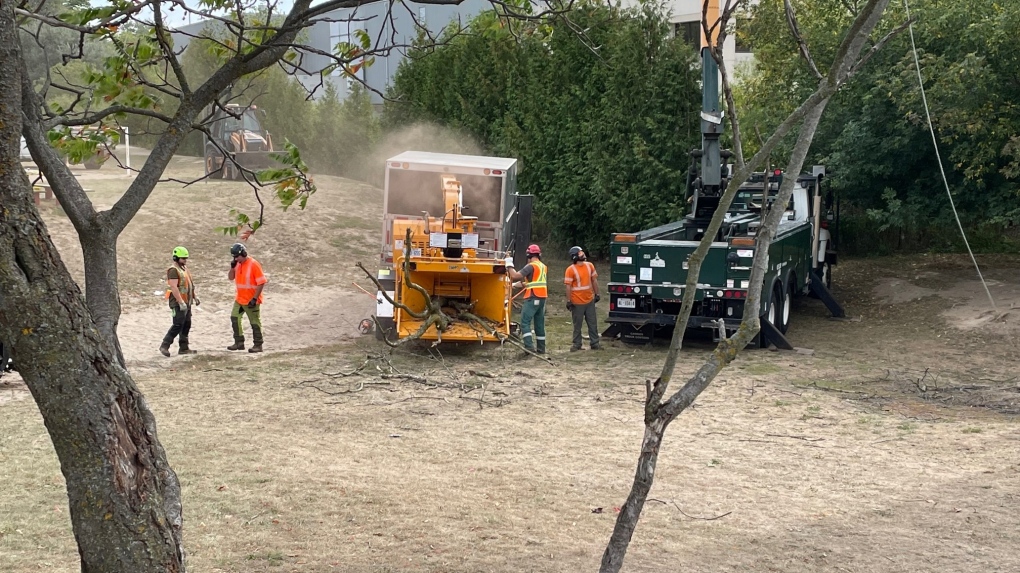 A centuries-old Elm tree is being taken down in Kitchener. (Tyler Kelaher/CTV News Kitchener)

NOTABLE EVENTS THIS TREE HAS LIVED THROUGH

Older than Waterloo Region, the Elm tree lived through transitionary periods, including the mapping, boundary destination and creation of Waterloo, Woolwich and Dumfries Townships.

According to the Region of Waterloo, the mapping and sale of lands in this area began in the late 1700s.

“In 1784, in recognition of their war efforts, the Six Nations were granted a large tract of land. It ran the full length of the Grand River and extended for six miles on each side. By 1798, three blocks had been sold, and in 1816 they became Waterloo, Woolwich and Dumfries Townships,” the region’s history reads.

In 2017, Canada celebrated its 150th year of independence from the British Empire, meaning the Elm tree was already over 150 years old at the celebration. The Elm tree was just over twice as old as the County of Canada.

The tree was around for over 150 years before Waterloo was incorporated as a village in 1857 and then a town in 1876. When Waterloo achieved the status of a city in 1948, the tree was already 255 years old.

The tree was 223 years old when residents voted to change the city’s name from Berlin to Kitchener during the First World War in 1916.

In 1947, the province of Ontario first confirmed the highly contagious and deadly Dutch elm disease. The disease throughout the range of elm in Ontario. When the highly infectious fungal disease swept through Ontario, the Elm tree in Kitchener was 254 years old.

Abraham Erb, a Mennonite from Pennsylvania, was one of the first settlers to arrive in Waterloo in 1806. At the time of Erb’s arrival, the Elm tree was 113 years old.

Since 1969, the Region of Waterloo has played host to Oktoberfest festivities. The notable event draws thousands of people each year. The Elm tree was 276 years old when the first Oktoberfest was held in Kitchener-Waterloo and was felled just weeks before the festival was set to return to the region.