CAMBRIDGE -- Animal rights activists protested outside African Lion Safari on Saturday, calling for the zoo’s animals to be placed back in the wild and for the safari to be converted into a sanctuary.

"(We are) really trying to drive up awareness that this place is really not a good place for animals," said protest organizer Mallika Gupte. "Animals don't have a voice, right. They don't have the ability to fend for themselves, to protect themselves from humans. And so, if we don't stand up for them who will?"

Protestors gathered outside the zoo, located on Cooper Road, demonstrating against what they call forced captivity and exotic animal breeding programs. 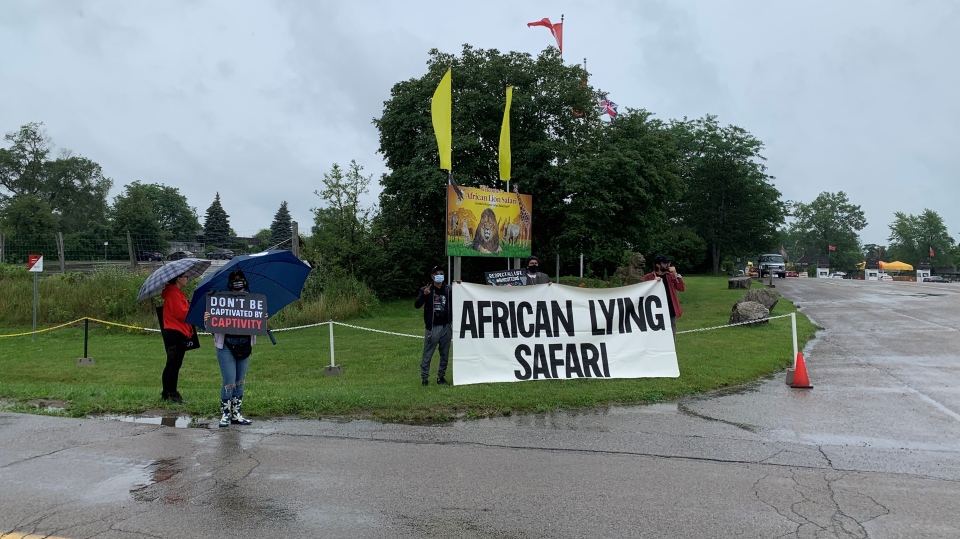 Gupte says the rally is to bring awareness to what she calls the mistreatment of animals.

"They're breeding animals here too, they're doing all sorts of nonsense. They're trying to sell them off to random places," she said. "They don't care about these animals and I want to make that abundantly clear, this is a place that does not care about their animals, they are using them selfishly."

In 2020, In Defense of Animals, an animal protection organization based in the United States, listed African Lion Safari as the most harmful zoo for elephants in North America.

In Defense of Animals listed the zoo's elephant breeding for sales, the use of bullhooks on elephants and training them to perform unnatural circus tricks as key concerns.

However, some safari goers on Saturday said the animals at the zoo look happy.

"Any animal enclosure that they're not out in the wild is obviously not fair or right in any park or wherever you go," said one visitor. "For the most part, they all seemed to be pretty happy animals, just roaming around and eating and stuff, so I don't think it was that bad."

In a statement, African Lion Safari said it is "committed to animal welfare, conservation, science and education."

African Lion Safari says it has been accredited for more than 40 years with Canada's Accredited Zoos and Aquariums and is in full compliance with the standards that govern the park.

The company says its elephants are able to roam hundreds of acres of woodland and fields, adding African Lion Safari ended its elephant ride interaction programme in 2019.

According to the statement, elephant handlers sometimes use a tool, known as a guide, to provide directional cues to the animals but this is done without exerting force.

"At African Lion Safari, we have an unwavering resolution that we continue our conservation mission to provide the highest standard of care for our elephants," the company said.