$50,000 reward offered for information in 'execution-style murder' of Isaiah Macnab

The Waterloo Regional Police Service is offering a cash reward of up to $50,000 for credible information that leads to an arrest in the 2018 shooting of Isaiah Macnab.

The reward was announced during a media conference on Oct. 16, more than two years after the 20-year-old man's death.

The WRPS had responded to a parking lot near Pandora and King Street East for a fatal daylight shooting on the morning of Sept. 18, 2018.

On Friday, Police Chief Bryan Larkin called it an "execution-style murder," which he said was "brazen and planned."

Shortly after the shooting, a white four-door Mercedes CLA 250 with stolen licence plates and two people inside was seen fleeing the area. Last year, police released video of the moments leading up to the shooting.

The suspect vehicle fled eastbound on Highway 8, went onto Highway 6, then returned to the eastbound lanes of Highway 401.

It was last seen about 30 minutes later leaving the 401 when it was seen exiting onto Trafalgar Road in Mississauga, which is when the suspects got away.

Larkin took the opportunity to implore the public for more details, urging someone to come forward.

He pointed to the fact that the shooting happened mid-week and during the day, when people were going about their business in the area. 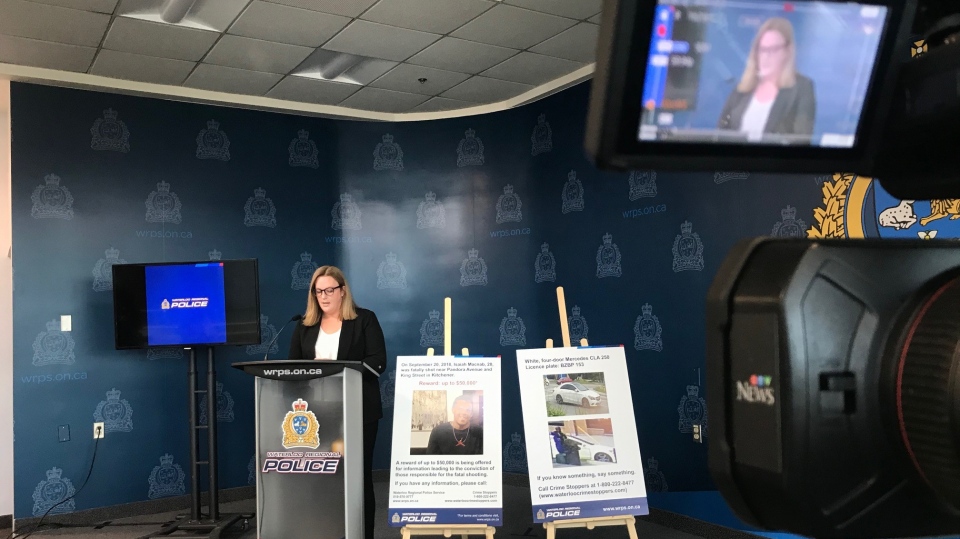 Kelly Macnab, seen here on Oct. 16, 2020, pleads with the public for information regarding her son's death. (Dan Lauckner / CTV Kitchener)

"My son Isiah was, and always will remain, the love of my life," Macnab said.

"The day that he died, my world went dark," she remembered.

Macnab shared that her son had been in day parole at New Directions, a halfway house in the area, after making a "serious mistake" the year before. She said he had been doing well enough to be approved to move home by the end of 2018.

He had made gains in employment and was planning on going to college, she said.

"He did everything we could ask of a young person who had made a dire mistake, and he should be standing here as a living, breathing example of a successful rehabilitation story that is the ultimate goal of our criminal justice system."

She spoke about the pain of losing her son, and the fact that his father, his sisters and his girlfriend lost a loved one, too.

Macnab also shared some gruesome details about the way in which her son was gunned down.

"He was ambushed while looking down at his phone with earbuds in his ears. By all eye-witness accounts, Isaiah never saw it coming and had no time to react or defend himself," she said.

"The shooter exited the car and immediately shot my son, causing him to slump over. He then stood over my son and riddled both his head and body with bullets."

"Mr. Macnab was executed and left deceased at the side of the roadway," Larkin said.

She acknowledged the details were difficult to hear, but pleaded with the public for information regarding her son's death.

The Service is issuing a reward of up to $50,000 for information leading to the conviction of those responsible.

If you know something, say something.

The reward of up to $50,000 has been authorized by the Waterloo Regional Police Services Board, and is for "the successful prosecution of the person or persons responsible for the murder of Isaiah Macnab," a press release explained.

Waterloo regional police say they last offered a reward like this one back in the 1990s. They added the idea came from Macnab's mother, who is hoping to move her son's investigation forward.

Employees of law enforcement agencies, correctional institutions or volunteers of their services, and the immediate family members of any of those people, are not eligible for the reward.