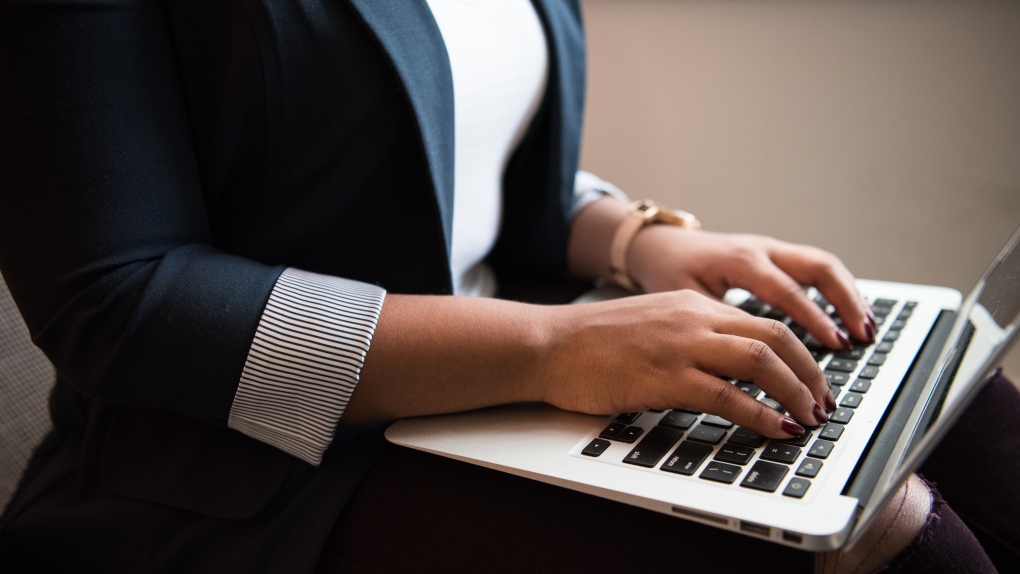 A woman on a laptop seen in this file photo. (Christina Morillo / Pexels)

OTTAWA -- Women in their core working years earned on average 13.3 per cent less per hour than men in 2018, marking a 5.5 percentage point improvement over the past 20 years, according to a new report by Statistics Canada.

That means that women earned roughly 87 cents for every dollar earned by men.

"The gender wage gap has narrowed over time, both in Canada and elsewhere," the researchers said. "However, given that women in Canada have surpassed men in educational attainment, diversified their fields of study at post-secondary institutions, and increased their representation in higher-status occupations, the persistence of gender-based wage inequality warrants continued attention."

Changes in the distribution of men and women in different occupations was key to the smaller wage gap in 2018, said the report's authors, Rachelle Pelletier and Martha Patterson of Statistics Canada's Centre for Labour Market Information and Melissa Moyser of the agency's Centre for Gender, Diversity and Inclusion.

Notably, in 2018 a larger share of core-aged women were working in professional occupations in the three areas of law and social, community and government services; education services; and in business and finance, than in 1998, the researchers said.

However, the distribution of women and men in different industries actually widened the gap, driven by the "high-paying and male-dominated construction sector," where employment increased over the 20-year period. The decline of employment in manufacturing counteracted this effect, with the percentage of core-aged men employed in this sector falling to 15.5 per cent in 2018, from 25.2 per cent in 1998, the researchers added.

An increase in women's educational attainment was the second-most important determinant in the decreased wage gap, researchers said. In 1998, there were equivalent proportions of women and men who held a university degree at the bachelor level or above, at 21.6 per cent and 21.5 per cent respectively. But in the following 20 years, the proportion of women with at least a bachelor's degree increased by 19.6 percentage points to 41.2 per cent, while men saw a 10.8 percentage point increase to 32.3 cent.

"As workers with higher education earned more on average, the relative increase in women's educational attainment accounted for 12.7 per cent of the decrease in the gender wage gap that occurred over the period," the report said.

The proportion of men covered by a union or collective agreement fell by 8.6 percentage points between 1998 and 2018 to 29.5 per cent from 38.2 per cent two decades earlier, but the equivalent proportion for women held steady at a little less than 36 per cent.

"These differing trends largely reflected the fact that men with union coverage were concentrated in manufacturing -- a declining sector through the first half of the period -- whereas women in unionized jobs have been concentrated in health care and social assistance, and educational services," the authors said.

This report by The Canadian Press was first published Oct. 7, 2019.