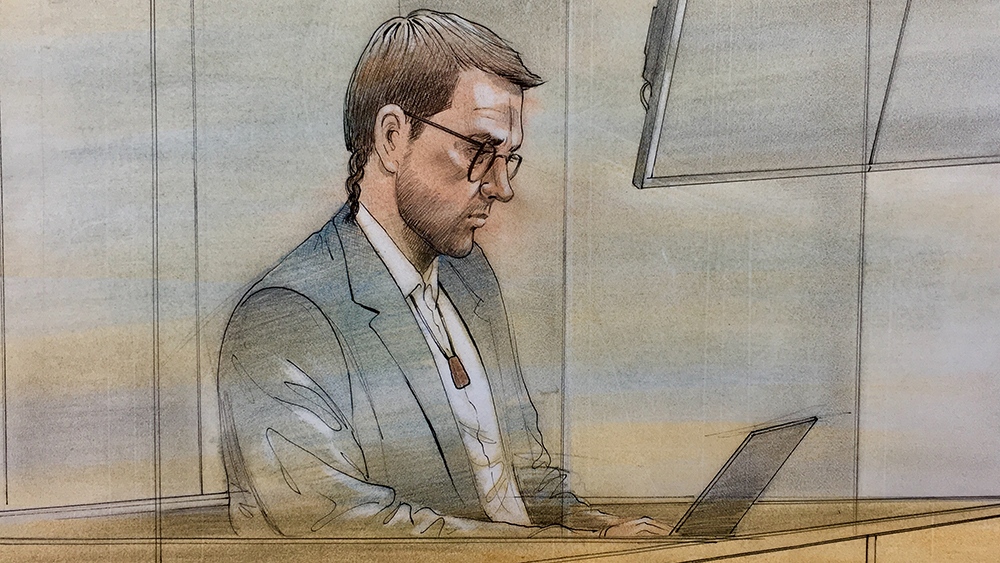 After re-enacting the fatal shooting of an aviation executive 20 times using mannequin heads, police forensic experts concluded it was unlikely the man shot himself in the face, as authorities initially believed, a murder trial heard Thursday.

Det. Const. Grant Sutherland testified that gunshot residue was found on Millard's face and the back of his right hand which was tucked under his head, but not on the left hand, which was close to the gun found beside his bed.

Sutherland said there should have been gunshot residue on Wayne Millard's left hand if he used it to pull the trigger.

"One almost has to hold it very strangely," he said, before taking out the gun found beside Millard's body -- a 32-calibre Smith and Wesson revolver -- and showing court how the man would have held it if he shot himself.

Holding the gun upside down with his left thumb on the trigger, Sutherland contorted himself trying to get just the right angle -- 67.5 degrees according to his testing -- and stumbled trying to get into position.

The prosecution asked if he thought Wayne Millard fired a gun in that position.

"I don't believe that he did," Sutherland said.

Millard's son, 32-year-old Dellen Millard, has pleaded not guilty in the death of his father.

A pathologist who performed the autopsy on Wayne Millard's body told court on Wednesday that the gun was fired at close range and the bullet obliterated his left eyeball and became lodged on the right side of his brain above his ear.

Sutherland said he was asked to examine photographs of the scene and the autopsy report on Aug. 6, 2014, four months after Dellen Millard was charged in his father's death. He said the forensic testing was conducted on Nov. 25, 2015 at the Toronto Police College, using the gun found in Wayne Millard's bedroom.

The testing involved 20 separate mannequin heads resting next to a mannequin arm on top of pillows in an effort to recreate the gunshot residue patterns found in the photographs of the scene.

Court saw videos of each gun shot in which Sutherland is seen standing over the mannequin and holding the gun in various positions.

Sutherland told court he wasn't able to perfectly recreate the gunshot residue pattern found on Wayne Millard's pillow -- he couldn't duplicate a straight gunshot residue line seen on the pillow --something he attributed to numerous reasons including firing a bullet into a Styrofoam head rather than a real one.

Court documents show Dellen Millard's DNA was found on the gun's handle. Court has also heard the younger Millard blamed his father for the financial woes the family-owned aviation business was experiencing and called him a failure just days before his death.

Dellen Millard told police in an interview hours after his father's death that Wayne Millard was an alcoholic who was suffering from depression.