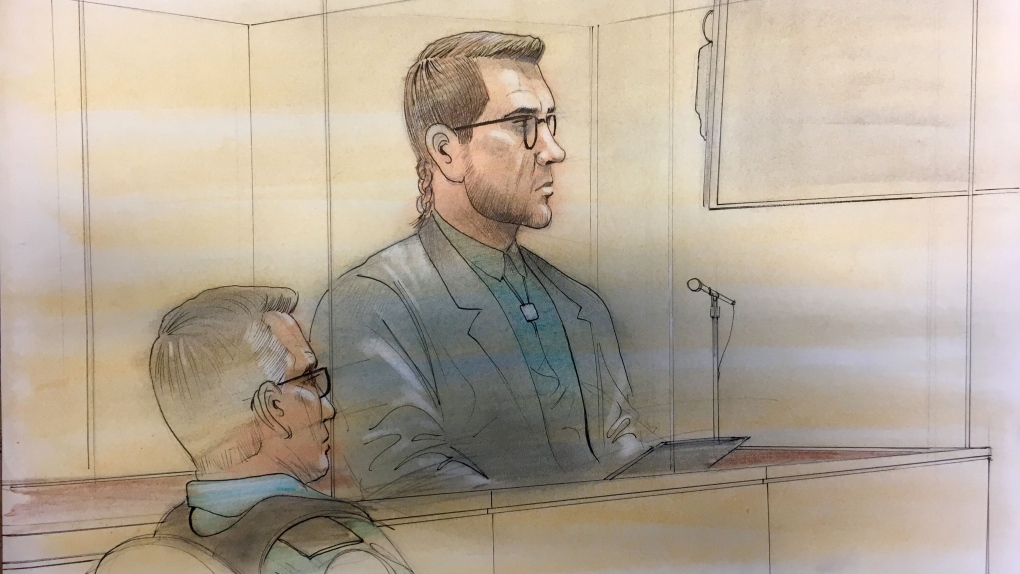 Dellen Millard is seen attending his trial on May 31, 2018 in this court sketch. (John Mantha)

Days before an aviation executive was found dead in his bed -- a bullet lodged in his brain -- his son called him a failure and blamed him for the financial woes the family-owned business was facing, a murder trial in Toronto heard Tuesday.

Dellen Millard, 32, a twice convicted murderer who is serving two consecutive life sentences, is accused of killing his father, Wayne Millard, on Nov. 29, 2012. He has pleaded not guilty to first-degree murder in his father's death, which was initially ruled a suicide.

A retired forensic detective showed court scores of text messages Millard sent after purportedly finding his father dead in bed. Jim Falconer said the texts were recovered from one of Millard's computers seized from the home he shared with his father in Toronto's west end.

At 5:56 p.m., Dellen Millard sent a text message to his friend Andrew Michalski.

"Bro please come over, I don't want to be alone, something terrible has happened," he wrote.

Court has heard Michalski went to Millard's home for a brief visit.

Millard texted his girlfriend in the early morning hours of Nov. 30, 2012, that his 71-year-old father had suffered from depression and had shot and killed himself.

In the texts read out by Falconer, Millard tells Christina Noudga his "world has never been so upside down." At the time, Dellen Millard was working for his father, who was in the middle of transforming Millardair from a company that rented out hangars to a maintenance and repair company and had built a massive hangar at the Region of Waterloo International Airport.

"The last time I spoke to him, I told him the company's financial troubles were his doing and that he was a failure," Millard wrote. "Usually he tells me not to worry. But this time he said maybe I was right."

Millard also told her his father has "always had depression, but he's never been suicidal."

Within days of his father's death, Dellen Millard changed the locks at the hangar and fired everyone working at Millardair, court heard.

On Dec. 4, 2012, Millard called all Millardair employees to the new hangar, which included 11 mechanics and five managers, including John Barnes, a longtime aircraft maintenance and repair manager.

"We were advised of Wayne's death," Barnes testified. "We were told at the time it was an aneurysm and that the business was going to be closed down."

Barnes said he met Wayne Millard the day before his death to discuss what benefit packages to sign the new employees up for. The company had recently received a crucial licence from Transport Canada to operate the business.

But money was tight, Barnes added, and Wayne Millard was dipping into his personal fortune to help finance the new business along with a multimillion-dollar business loan he took out.

The elder Millard told Barnes he had taken out a mortgage on the hangar and on the family home.

Barnes said Millardair had a customer lined up in Halifax, and there were other opportunities as well.

The company, he said, was "going to be viable," but at that point did not have any contracts signed.

Barnes said he wasn't sure of the younger Millard's role in the business other than that Dellen Millard's property company was doing the interior work on the hangar. He later found out Dellen Millard owned half of Millardair.

"He (Wayne) told me it was to leave something to Dellen," Barnes said. But Wayne and Dellen Millard "didn't see eye to eye."

Dellen Millard had a collection of vehicles and trailers on the hangar floor and the washrooms were used, but never cleaned, Barnes said. "It was deplorable," he said, adding that he couldn't show the hangar in that state to either Transport Canada or potential clients.

The trial has heard that Dellen Millard bought the handgun found next to his father's body from a weapons dealer. Dellen Millard's DNA was found on the handle of the gun.

Millard told police he last saw his father alive around noon the day before and said he stayed the night at his friend Mark Smich's house. Phone records indicate one of Millard's phones moved from Smich's house around 1 a.m. on Nov. 29, 2012, to his father's home where it stayed until shortly after 6 a.m.