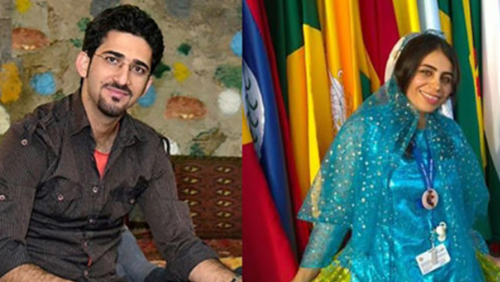 Milad Ghasemi Ariani and Ghanimat Azhdari were killed in the 2020 Iran plane crash (Supplied: U of G)

The University of Guelph has created a scholarship in honour of two students who were killed when a Ukrainian International Airlines flight was shot down in Iran two years ago.

Ghanimat Azhdari and Milad Ghasemi Ariani, who were both Iranian nationals, were returning to continue their studies after the winter break when the crash occurred.

The university established two $5,000 scholarships in their names, offered to qualified graduate students over the next five years. People can donate to the scholarships, and all donations will be matched by the U of G.

The Ghanimat Azhdari Memorial Scholarship was given to Amirhossein Alaghmandfard, a PhD candidate in the College of Engineering and Physical Sciences.

"As a community, we continue to seek ways to commemorate the indelible impact Ghanimat and Milad made on U of G and on the world – as individuals, as loved ones and friends, and as promising, young scholars,” said U of G president Charlotte Yates in the release. “I am delighted to congratulate Amirhossein and Akierah on being selected as the inaugural recipients of these memorial scholarships. Their dedication to graduate studies in their respective fields and to academic excellence will help U of G honour the legacies of Ghanimat and Milad.”

The provincial government also created scholarships to honour scholars who were killed in the crash. The scholarship was renewed on Friday, and will hand out $10,000 to 57 students, one in memory of each victim.