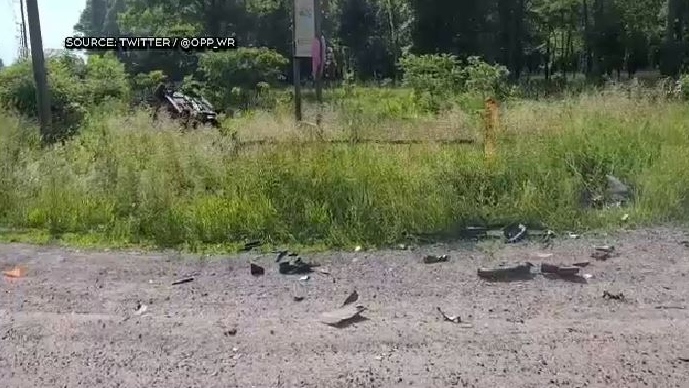 Shortly before 4:30 p.m., a vehicle travelling westbound on Concession 13 and a vehicle going northbound on Blueline Road collided at the intersection.

OPP said the one the vehicles left the road and rolled over several times.

"The good news is that person was wearing their seatbelt and suffered some injuries and has been transported to be seen by attending physicians," said Cst. Ed Sanchuk on Twitter.

The driver of the other vehicle, who was also wearing a seatbelt, was also taken to hospital with unspecified injuries.

"We need people to slow down, pay attention to driving and focus 110 per cent on their driving ability, get to where they're going, but more importantly, get home safely to their family," continued Cst. Sanchuk. "When you come up to an intersection please make sure to stop at the stop sign [and] you check twice. It's going to save a life and prevent you from being involved in a collision."

Police have not said if any charges will be laid.

A motorcycle driver was also killed in a collision on Blueline Road on May 13. That crash scene was closer to Port Dover.

Another motorcycle driver was also killed, and their passenger injured, in crash near Port Dover on Tuesday.

Violent crash at Blueline Road and Concession 13 of Townsend sends 2 drivers to hospital with injuries. #OPP continuing to investigate. Please #SlowDown and always check twice it will save a life. Investigation continuing.@NorfolkCountyCA #NorfolkOPP ^es pic.twitter.com/NIhsQHVZOi