Some Canadians happy to stay smartphone-free 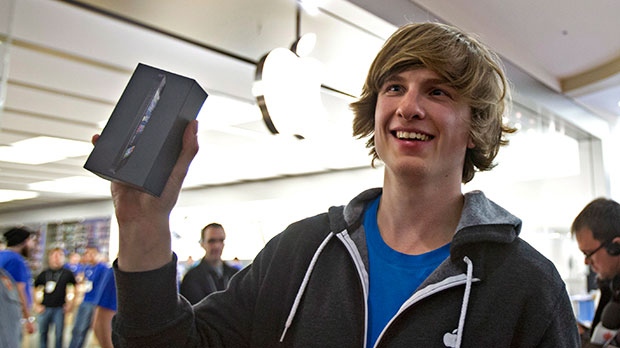 Olivier Levesque, walks out of the Place Sainte-Foy Apple Store with the first iPhone 5 sold, in Quebec City on Friday, Sept. 21, 2012. (Jacques Boissinot / THE CANADIAN PRESS)

Spring Gillard is an avid blogger and active on social media, but don't expect to see any emails or tweets sent from her Android device, BlackBerry or iPhone since she doesn't own a smartphone -- or a cellphone, either.

The Vancouver resident works from home and is amply wired for web use. But once Gillard steps away from the computer screen, whether for exercise or running errands, she relishes the chance to be truly unplugged -- and not tethered to a mobile device.

"I am on Facebook and Twitter and I use that in my work, but I just don't want to be available 24 hours a day. And I really do feel that it's important to give people your attention," said Gillard of communications company Garden Heart Productions and writer of the blog Compost Diaries.

Gillard said she's a Mac user, and if she ever were to get a smartphone, she'd likely opt for an iPhone.

"There's no question that they're cool," she said. "But you know, I spend so much time on computers and email and everything else, and I just don't want to go that extra step -- and I don't want to become one of those people that's so tied to their device."

A recent report by Rogers Communications revealed the majority of Canadians have a strong attachment to their mobile gadgets.

The survey of more than 1,000 smartphone or tablet users found that 65 per cent said they felt naked without their smartphone and Internet access. More than half of those polled said they check their mobile device before brushing their teeth in the morning.

From the iPhone 5 to the Blackberry Z10, launches of the latest smartphones have become the tech world's equivalent of the Super Bowl, where frenzied anticipation can rival the main event -- the unveiling of the gadgets themselves. But like Gillard, not everyone is flocking to snap up a mobile device.

While expressing love for the Internet, Twitter and Reddit, he also wrote of savouring time spent offline free from digital distractions.

"It seems like smartphones are reprogramming people, making them respond to bells in a manner that would embarrass Pavlov's dog. If you love that, great, but it's not for me," he wrote.

The 27-year-old Pot, who grew up on a dairy farm near Smithville, Ont., said he'd been explaining for a long time why he doesn't own a smartphone and wanted to put it in writing.

"It's surprising to people because it's a very tech-savvy town that I live in, and part of my job as a reporter is talking to people in the tech community here," the freelance journalist said in an interview from Boulder, Colo.

"But also, it's friends who just find it a little surprising that someone who spends so much time doing technological things and writing about technology doesn't own one."

Pot owns a cellphone with a full keyboard which he said "mostly sits in the house." His wife doesn't own a cellphone and the couple doesn't have a landline. A Google voice number redirects calls to his cell and computer, where he chats via Skype.

"I mean, they're cool. Don't get me wrong," Pot said of smartphones. "I'm just not super-interested in paying quite that much for a data plan right now.... It's quite a bit of cost.

"Would it be nice from time to time (to have one)? Yeah. Is it worth the cost? No," he added. "There's also the potential of being distracted by it constantly. And just add it all up and I'm just not all that interested."

In Gillard's case, part of her work involves designing and delivering tours related to sustainability. She admits there's an "inconvenience factor" to not having a cellphone at the ready to inform others if she's running late for the next stop.

Often compounding the issue is the difficulty in finding public payphones which are growing few and far between, she noted.

"Sometimes I wish, `Oh, boy, if I only had a cellphone right now I could call ahead' and so it's inconvenient. But so what?" she said with a laugh. "So it's a little inconvenient."

The 55-year-old University of British Columbia graduate student posted on her blog last year about being in the minority on campus as a non-cellphone user while observing others on their devices.

"You watch people come out of the building at the end of class and everyone has their face down looking at their phone. People aren't talking," she said. "To me, that's one of the most fabulous things about going to school: the social discourse that happens and engaging with people from all over the world and different ideas. I mean, that's what I remember from my undergrad."

Most young people are so used to being connected that for them, it's almost a normal state of being, said Anabel Quan-Haase, associate professor of information and media studies and sociology at Western University in London, Ont.

"They're constantly on their devices, and for them, not being on their devices means that they're going to miss out on something," Quan-Haase, director of the Sociodigital Lab, which does interdisciplinary research on social issues of digital technology.

"We've really now reached a level where the digital has become so ingrained in our daily lives.... it's become so routinized."

Quan-Haase said those who make the choice not to have a mobile device set clearer boundaries as to when they're "hyperconnected."

But since most of the technologies are connecting technologies, one of the key issues which arises for those considering using them is the feeling of peer pressure or need to connect, she noted.

"As we make choices about what devices we should use ... part of the decision is also made in terms of `Well, first of all, what do others have?' but also, `What allows us to connect best with that peer group, with that network?"' she said. "That's something that we saw also with Facebook and Twitter which is that the more people (that) are on it, there's a moment where ...everyone gets on it."

"I think it makes a lot of sense that peer pressure --and that sort of mocking of not having one particular device or the most up-to-date device -- would yield some pressure. But I think that it is really a choice," she added. "And people like myself for example, I've decided still I don't need it because it gives me that control over when I'm reachable."

While part of her work entails regularly checking email, Quan-Haase said as a mother of two young children, being with them is a priority. She's doesn't have a data plan for her BlackBerry, limiting the device solely to calling and texting capabilities.

But she acknowledges that drawing the line between the offline and online realms is increasingly challenging.

"Before, it was easier for us to say, `Here's the work boundary. When I close my office door, this is where I leave the work behind.' Whereas today, it's almost impossible."

"Wherever we go, we're so mobile, we take our work with us. So those boundaries are much more blurred."