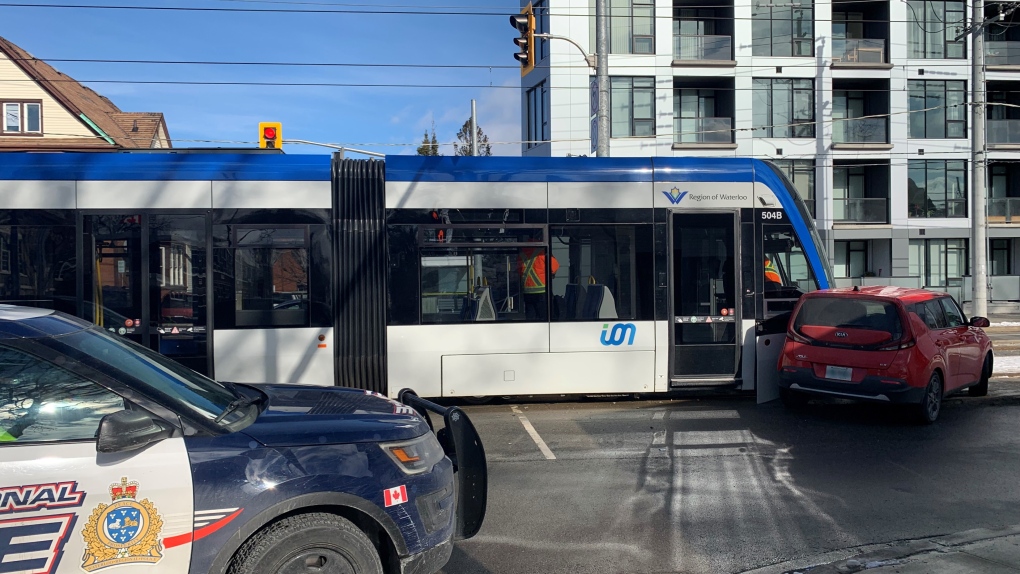 A red car blocks the path of an LRT ION train after a collision in Kitchener on Jan. 24, 2023. (Colton Wiens/CTV Kitchener)

A collision involving an LRT train and a car on Tuesday afternoon led to service disruption in Kitchener on King Street.

According to a tweet by Grand River Transit posted just after noon, ION trains are not running between Grand River Hospital Station and Kitchener Market Station due to the collision.

“Service between Kitchener Market and Borden is using only one track in both directions,” said the service alert.

Officials with GRT are advising riders they may need to board on the opposite platform.

Several police cruisers could be seen at the scene of the crash along King Street West at Agnes Street.

As of 1 p.m., the road was closed to vehicle traffic.

Details about the cause of the crash and if there have been any injuries have not been released.

Al Crichton, who lives in the house across from the crash, said he heard a bang that was loud enough to alert him from his second-floor unit on the opposite side of the building.

“You get used to that bang on this corner. I came down, and the people were okay on the train, everybody was okay in the car – they were just shaken up pretty good,” said Crichton.

Crichton said he believes this to be a nasty corner for collisions involving LRT trains and cars, and he has seen a handful of crashes at the same intersection.

Waterloo regional police Const. André Johnson told CTV News in an email that at least one person was transported to hospital with non-life-threatening injuries

“At approximately 12 p.m., we responded to the area of King Street West and Agnes Street in Kitchener for reports of a collision between a Kia motor vehicle and an LRT train,” Johnson said.

He said the intersection is clear now, and the investigation is ongoing.