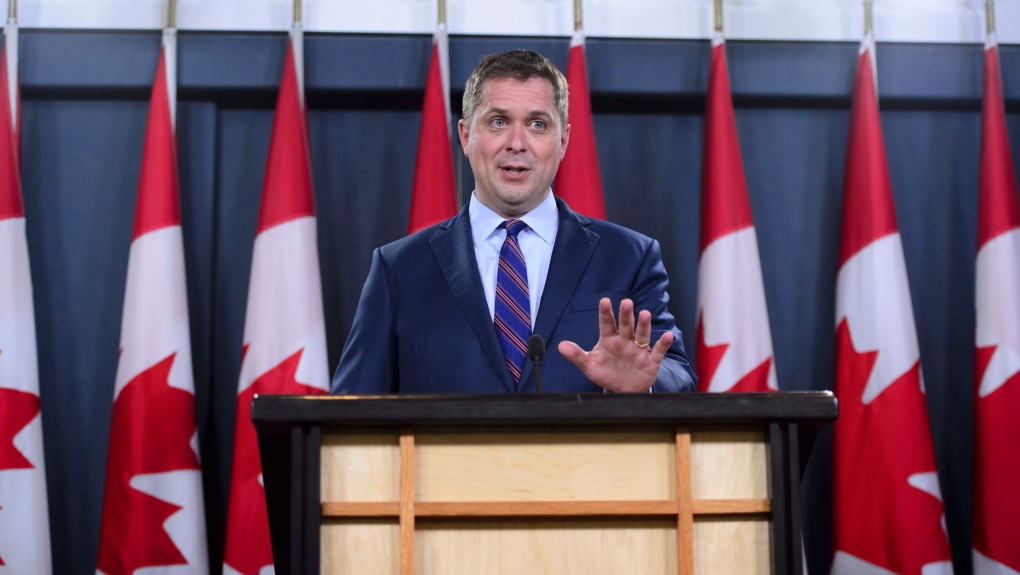 Conservative Leader Andrew Scheer says his climate plan will be "Canada's best chance" to hit its targets under the Paris climate-change agreement and that it can happen without a carbon tax.

Scheer outlined his climate policy in the backyard of a private home in Chelsea, Que., Wednesday evening, not far from where flooding linked to climate change hit for the second time in three years this spring.

"Conservatives fundamentally believe that you cannot tax your way to a cleaner environment," Scheer's prepared said. "Instead, the answer lies in technology."

The environment, and climate change in particular, are garnering the most attention ever heading into a federal campaign as Canadians in all parts of the country are dealing with more frequent forest fires, droughts, floods and storms.

The plan does not specify how much any of its 55 elements would cut emissions and suggests Canada's pathway to meeting the targets would include using Canadian products to reduce emissions in other countries.

"Greenhouse-gas emissions do not recognize borders," Scheer's speech said. "Nor are the impacts of climate change proportional to any one country's emissions. Whether emissions are reduced in Canada or in China, the scientific impact on global climate change is the exact same."

His platform, dubbed A Real Plan to Protect Our Environment, looks at introducing a capital cost allowance in Canada to industries that show they are reducing emissions in other countries. He specifically mentions using Canadian liquefied natural gas to replace coal as a source of electricity and exporting more Canadian aluminum, which he says is made with fewer emissions than aluminum in other countries.

Canada's commitment under the Paris climate-change agreement is to cut emissions to 70 per cent of what they were in 2005 before 2030. Canada needs to get to 513 million tonnes of carbon dioxide a year to hit that target. In 2017, the most recent year for which statistics have been compiled, Canada's emissions were 716 million tonnes.

There is an allowance in the Paris accord for "co-operative mechanisms," which allow for reductions in one country to be counted towards the targets of another country, as long as both countries agree. The rules for that allowance have not yet been set and the intention was for it to be used for countries to increase their targets beyond the original Paris commitments.

The targets in the Paris accord are not legally binding, however, so there is no monetary penalty if Canada misses them.

Canada's existing climate plan under the Liberal government leaves the country about 80 million tonnes shy of its Paris targets in 2030. The national price on carbon, set at $20 a tonne this year, rising to $50 a tonne by 2022, will reduce emissions between 50 million and 60 million tonnes a year, an Environment Canada analysis says.

Scheer's plan is to make scrapping that carbon tax one of his first actions as prime minister.

He also intends to replace the Liberals' system for applying the carbon tax to major industrial emitters with one that requires them to invest in clean technology for their own companies.

Scheer promises to give companies a tax break on income earned from developing and patenting green technology in Canada. Homeowners will get a tax credit worth as much as $2,850 for making energy-efficiency upgrades to their homes, such as installing solar panels or putting in better-insulated windows.

He also intends to create a green-technology fund with $250 million in federal money to draw private investments in green technology and repay the federal contributions when the technology is sold.

Environment groups immediately panned the Scheer plan, saying it is similar to direct requests from the Canadian Association of Petroleum Producers, which released a climate plan a few weeks ago.

"This is a plan only an oil lobbyist could love," said Keith Brooks, a senior energy strategist at Greenpeace Canada.

Catherine Abreu, executive director of the Climate Action Network Canada, said the Scheer strategy is a research-and-development plan, not a climate-action policy.

"This might be a plan to cut other things but it is not a plan to cut emissions," said Abreu. "Is Canada somehow going to save the world by increasing our own emissions?"