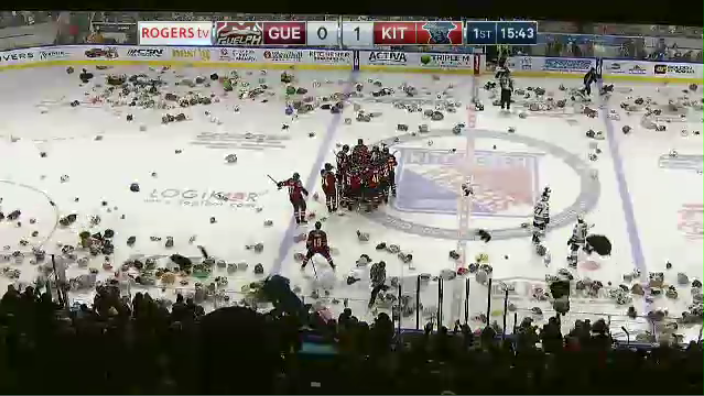 Nearly 10,000 stuffed animals were tossed onto the ice Tuesday night as the Kitchener Rangers hosted its 27th annual Teddy Bear Toss at The Aud.

It was only 4:17 into the game when Rangers captain Francesco Pinelli, scored the first goal of the night.

Fans then threw 9,962 stuffed animals onto the ice, which have since been collected and destined for donation to local charities.

“It’s a great feeling to see all the fans that support us, and all the teddy bears that went out on the ice. It was a special moment,” said Pinelli.

The Rangers have donated over 170,000 stuffed animals since the toss began 27 years ago.

Rangers fan Ashley Atcheson along with her two kids brought a bag full of plush toys to the game to toss on the ice.

"There's a duck, two bears, and I think it's like a cub, a lion," said Atcheson.

When the first goal hit the back of the net, stuffed animals rained down onto the ice, and those in the front row were able to retoss the ones that didn’t quite make it onto the ice.

"Most of the time we get hit in the head with a teddy bear, so I get to re-throw it, so that's fun,” said Rangers fan Olivia Moniz.

It was a successful night off the ice as the event brought in over 6,600 fans, a season-high, and also a victorious night on the ice.

The Kitchener Rangers defeated the Guelph Storm 4-1 in another installment of the Highway 7 rivalry. The Rangers have now won three of their last four games.

The Biden administration is considering a plan to shoot down a large Chinese balloon suspected of conducting surveillance on U.S. military, by bringing it down once it is above the Atlantic Ocean where the remnants could potentially be recovered, according to four U.S. officials.

The Arctic air that descended on the Northeast on Saturday brought dangerously cold sub-zero temperatures and wind chills to the region, including a record-setting wind chill of minus 108 degrees Fahrenheit (minus 78 C) on the summit of Mount Washington in New Hampshire.