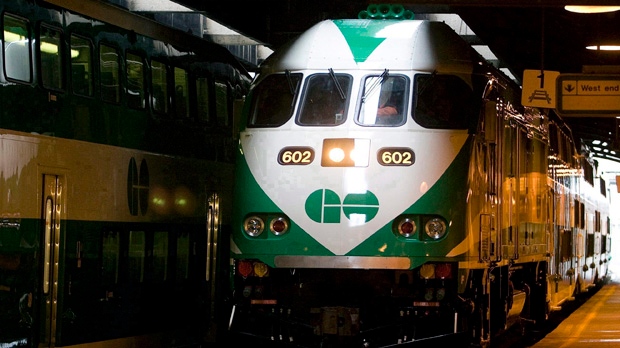 A GO Transit train arrives at Union Station in Toronto in this file photo. (The Canadian Press/Adrian Wyld)

Ontario is studying the feasibility of using hydrogen fuel cells to power electric trains on the GO Transit rail network.

The Liberal government has been promising electrification of the system for years and Transportation Minister Steven Del Duca announced Thursday that an environmental assessment has started.

As part of that process of converting the system from diesel to electric, Ontario will be considering the clean electric technology of hydrogen fuel cells as an alternative to overhead wires, Del Duca said.

"Electrification is key to bringing quicker, cleaner and more frequent rail service to the GO network," he said.

The government has said it aims to have core segments of the network electrified by then. It has earmarked $13.5 billion to implement GO regional express rail and expand two-day, all-way service.

Fuel cell vehicles are quiet and emissions free, running on power produced when hydrogen combines with oxygen in the air to create water.