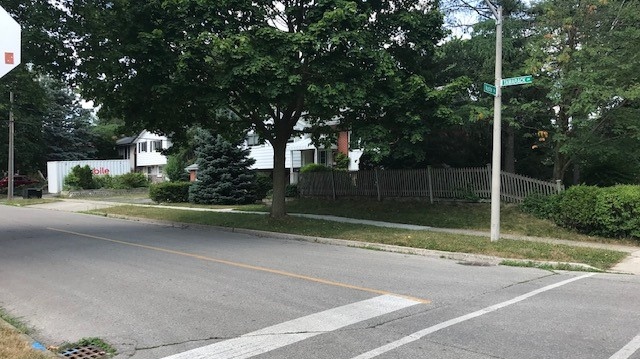 The intersection of Austin Drive and Tamarack Drive is seen on July 7, 2022. (Dave Pettitt/CTV Kitchener)

The Waterloo Regional Police Service has arrested a Kitchener man after receiving multiple reports of a suspicious person in Waterloo's university district.

Police have received reports of a suspicious person for the past several weeks.

On August 3, a 38-year-old Kitchener man was arrested and charged with the following offences:

According to police, the first report was made on July 2. Police said an unknown male was seen in the backyard of a residence on Hickory Street West, near Spruce Street, around 2 a.m.

On July 3, at approximately midnight, a suspicious person was observed in the areas of Austin Drive and Tamarack Drive and Hickory Street West and Spruce Street.

On July 13, between 11:10 p.m. and 11:20 p.m., an unknown man was observed peering through a window of a residence in the area of Hickory Street West and Spruce Street.

The man fled before police arrived.

Police said an incident on July 17, involving an unknown male who was observed in a residential backyard in the area of Austin Drive and Tamarack Drive is not connected to this individual.

Donald Trump invoked the Fifth Amendment and wouldn't answer questions under oath in the New York attorney general's long-running civil investigation into his business dealings, the former president said in a statement Wednesday.