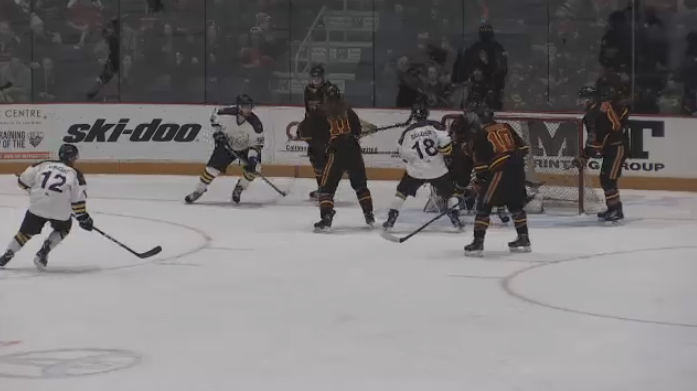 With the OUA men’s hockey season beginning, the Wilfrid Laurier Golden Hawks hope to get out to a faster start than last season.

“It wasn’t so much that we played poorly. We were losing a lot of close games,” says Manager of Hockey Operations and Head Coach Greg Puhalski.

The purple and gold began the season with only one win in their first eight games.

Over the next 20 games the Golden Hawks were able to win 12, finishing fourth in the Western conference and making the playoffs.

“The heart we showed last year, we want to make sure we start the season with that,” says Puhalski.

Over the off season the Golden Hawks added some size to their roster.

“We’re as big as we’ve ever been. That doesn’t mean anything more than that but I’ve been doing this for a number of years and the one thing you can’t teach is size,” says the head coach.

New to the team are defenceman Jake Payette, who stands 6 feet 8 inches and weighs 245 pounds and Steve MacLean, who is 6 feet 7 inches tall and weighs 209 pounds.

“We hope to utilize our size to our advantage and the style that we want to play,” says Puhalski.

He explains the style isn’t rough or undisciplined but he wants to be a team that can possess the puck longer and grind teams down.

“Guys have put in a lot of work in the off season and have come into camp in really good shape,” say the head coach.

The Golden Hawks season begins on Friday evening when they play Lakehead at the Waterloo Memorial Recreation Complex.