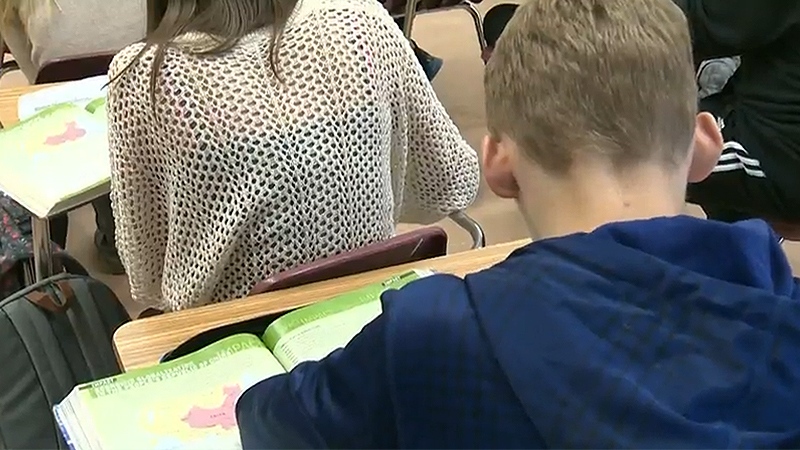 TORONTO -- Teachers in Ontario's public elementary and high schools have started administrative work-to-rule campaigns to put pressure on the government at the bargaining table.

Elementary Teachers' Federation of Ontario president Sam Hammond said his union is very far apart on issues that affect both teachers and students.

"ETFO wants the (Premier Doug) Ford government to work with us on important issues but, so far, it has not shown much interest in doing that," Hammond said in a statement. "Our members are getting impatient, and they are taking strike action because it seems to be the only way to get this government's attention."

Education Minister Stephen Lecce said contracts can be achieved if both sides are reasonable, and called the work-to-rule actions "regrettable."

"This escalation to a partial withdrawal of services, including targeting math supports and report cards, hurts our children the most," he said in a statement.

During the work to rule, high school teachers will also not complete ministry data reports or participate in ministry- or school board-driven professional activities.

Elementary teachers will also not do any online training by the ministry, not take part in any school board activities on professional activity (PA) days, and not respond to any emails from administrators outside of school hours, except if it is about safety, support for students with special needs or for a supply teacher to accept a job.

Hammond has said the key issues are more supports for students with special needs, addressing violence in schools and preserving full-day kindergarten.

After the previous education minister, who was ultimately demoted, opened the door to changes to the program, the government later committed to "full-day learning" -- phrasing that doesn't ease the union's fears.

Lecce said Tuesday that his goal is to strengthen full-day kindergarten.

"We believe that the model is working and there's no plan on my desk to change it," he said.

Hammond said Lecce needs to let his representatives at the bargaining table know that.

"ETFO proposed the same idea months ago and still hasn't received a response from the government," he said in a statement.

But Lecce has said that compensation is a major issue at the table -- with teachers looking for roughly two per cent wage increases. The government recently passed legislation limiting raises for all public sector workers to one per cent per year for three years. The unions have said they are preparing a court challenge, saying the law infringes their right to collective bargaining.

The government has so far reached a deal with only one of the five major education unions.

The Canadian Union of Public Employees agreed to one per cent increases for three years, and though it would have liked larger raises, the union also secured the restoration of key government grants such as $58.3 million used largely for education assistants working with students with special needs and an additional $20 million to help restore jobs for clerical workers and custodians.

Issues at the table with high school teachers include larger class sizes and new mandatory online learning classes. The government has partially walked back both contentious items, but Ontario Secondary School Teachers' Federation president Harvey Bischof has said that will just leave the education system "somewhat worse" instead of "much worse."

The government announced in the spring that they were increasing average high school class sizes from 22 to 28 over four years and requiring four online credits to graduate. In recent weeks, it has offered a class-size increase to 25 instead, and dropped the e-learning requirement to two courses.

But the teachers don't want any mandatory online courses or any class size increases. They note that the government's offer of increasing class sizes to the lower target of 25 would also mean local class size limits are removed, essentially allowing the province to see the number of students per class climb indefinitely.

The Ontario English Catholic Teachers' Association is scheduled to have talks with the government on Friday involving a conciliator. Both OSSTF and ETFO requested a so-called "no-board report" after one day of conciliation, which starts the countdown to being in a legal strike position.

This report by The Canadian Press was first published Nov. 26, 2019.