Oktoberfest is known for its dancing, drinking and Bavarian-themed outfits.

But this year party-goers will see some new ads at their festhallen promoting a “safe and consensual festival.”

The campaign is called #OnlyJaMeansJa. Ja is the German word for “yes.”

One ad shows a dirndl, along with the words: “This… doesn’t mean yes.”

The message is that unwanted sexual advances are not wilkommen at Oktoberfest.

Another ad reads: “Prost to guys who step in when their buddy isn’t respecting boundaries.” 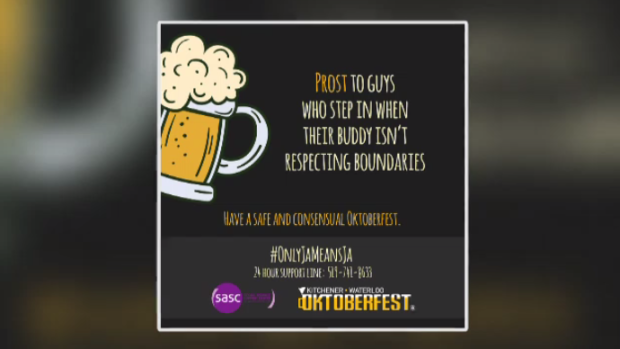 Oktoberfest organizers worked with the local Sexual Assault Support Centre on the campaign.

“You’ll see social media posts, there will be posters up in the festhalls,” says Sara Casselman of the SASC. “We actually worked to train all the staff involved and volunteers related to Oktoberfest on how to recognize and respond to sexual violence.”

There were nearly 900 incidents reported to Waterloo Regional Police during the entirety of 2018.

That may be misleading, says the SASC, because statistics show only 5% of survivors contact police.

“What we’re trying to do is create fun, safe spaces,” says Casselman. “We’re trying to promote a culture of consent, but we also want [festival-goers] to know we take it seriously.”