'No one will ever walk alone anymore': Every Child Matters crosswalk unveiled in Kitchener

'No one will ever walk alone anymore': Every Child Matters crosswalk unveiled in Kitchener

A new project honouring the victims of Canada’s residential school system has been installed in Kitchener.

The Every Child Matters crosswalk was officially unveiled Friday at a ceremony at Victoria Park.

The crosswalk, which organizers hope will raise awareness about the devastating impact of residential schools, is the first in Canada to be endorsed by the Orange Shirt Society.

“It’s going to be the first of many more,” said Orange Shirt Society president Shannon Henderson. “I would like to see this represented in more cities, especially around the residential schools.”

Sheena Merling, Bin-no-g Man-na-doe Quay – Spirit of the Children is the voice behind the project and the resident lead for the Every Child Matters Crosswalk committee. Merling said the project began about a year ago after receiving a grant from the City of Kitchener.

“It shows me that I’m not alone,” Merling said of the finished installation. “It shows me community really speaks to the heart and that we all want to learn from each other.”

“No one will ever walk alone anymore.” 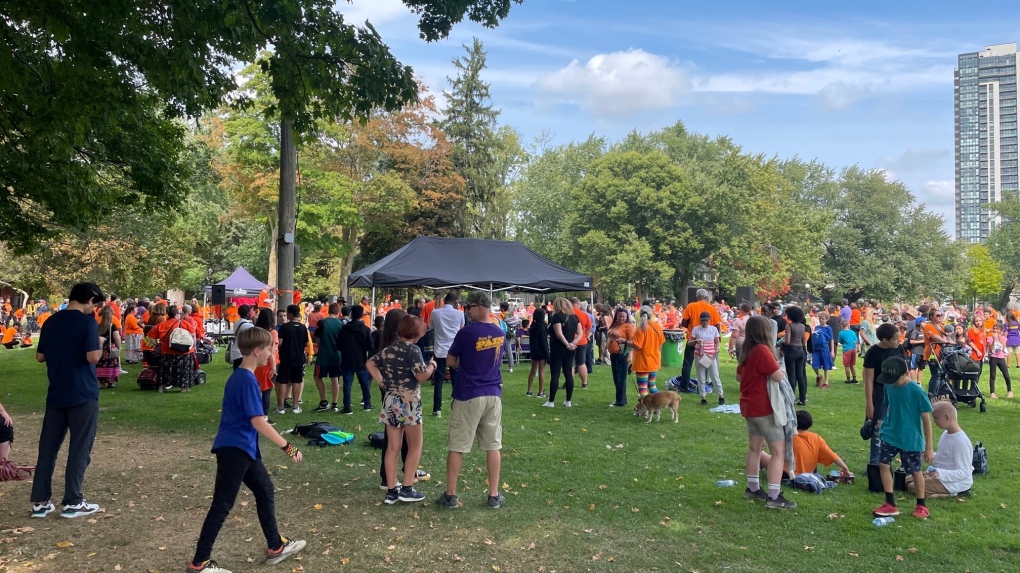 A crowd gathers at Victoria park for the unveiling of the Every Child Matters crosswalk. (CTV Kitchener/Tyler Kelaher)

The committee placed 6,321 footprints along the path leading to the crosswalk in memory of the thousands of Indigenous children killed at residential schools.

The crosswalk’s design was created by Alberta artist Geraldine Catalbas who flew in for Friday’s event.

She said some of her friends’ parents and grandparents were impacted by residential schools, and she wanted her work to honour them.

“I just wanted to dedicate it to them because they still show so much kindness and so much hard work, and they’re still going,” Catalbas said. “I just wanted to pay respects to them as well, and also the children who sadly passed away there.”

‘WE WANT A BETTER FUTURE’

The crosswalk sits around 200 feet away from the park’s Queen Victoria Statue which has been the centre of controversy in the last year with calls made to remove it due to its connection to Canada’s colonialist history.

Merling believes having the crosswalk so close to the monument is a sign of forgiveness and a step towards reconciliation.

On Friday, children’s shoes were left on the steps of the monument to signify healing and truth.

“For me, I wanted to show people we can’t erase history, but we can move ahead in the future. The yin and the yang to it, what community is about. We want to learn from each other. We want a better future,” Merling said.

Support for is available for survivors and those affected by the ongoing legacy of residential schools.