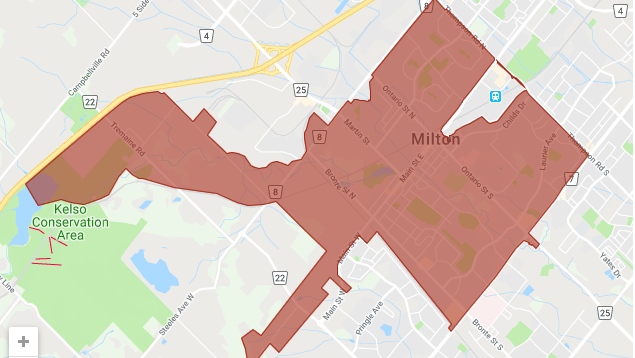 A map of areas affected by Milton's boil water advisory for December 7-10, 2018.

A boil water advisory will remain in effect until Monday for parts of Milton.

The Medical Officer of Health for Halton Region issued the warning as a result of a watermain break.

They’re advising homeowners and businesses in the area to take precautions. That means using an alternative water supply or boiling water for at least one minute before drinking, brushing teeth, cooking or washing food, and dishes.

Officials are also notifying restaurants and anywhere else that food is prepared that they should close until the advisory is lifted.

Residents who need clean water can bring empty containers to the Milton Sports Centre where they will be filled for free on Saturday, Sunday and Monday until 12 a.m.

The Region says the advisory will be lifted once laboratory tests confirm the water is safe to drink.

The community will be notified by telephone, social media and on the Region’s website.

Food preparation facilities in parts of #MiltonON affected by the Boil Water Advisory will be closed until the advisory is lifted. See a map of the affected areas: https://t.co/X46y8N0qxQ https://t.co/jlvQBJ1vQx