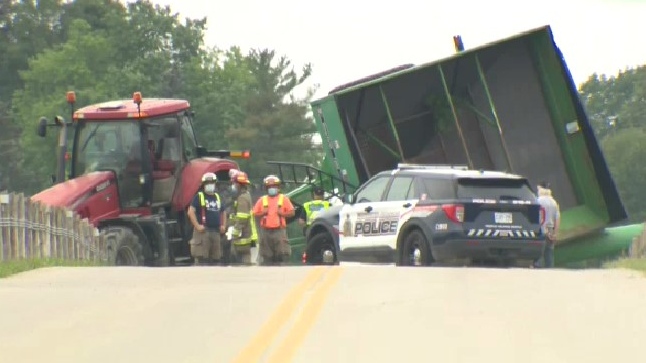 Around 4:45 p.m., police say they were called to Sandhills Road for reports of a single-vehicle collision.

According to a release, a farm tractor was travelling southbound on Sandhills Road, pulling a newly-purchased grain trailer from Listowel to Dunnville when it struck the side of the bridge that spans Highway 7-8.

As a result of the collision, police say the tractor jumped the guardrail, flipping the trailer and completely blocking both lanes.

A passenger in the tractor, a 64-year-old Fort Erie man, was ejected from the tractor and sustained severe injuries, officials say.

He was transported to hospital where he was pronounced dead.

A 61-year-old driver was uninjured.

UPDATE: The tractor pulling a grain trailer struck the bridge causing the trailer to flip and the passenger to be ejected. A 64-year-old Fort Erie male was transported to hospital where he was pronounced deceased. The driver was uninjured. The investigation remains ongoing. https://t.co/RoyJb7kQMD

Sandhills Road at Gingerich and Bleams Road remained closed overnight for the investigation and guardrail repairs.

The investigation is ongoing and police say charges are pending. Anyone with information or who witnessed the collision is asked to call police or Crime Stoppers.