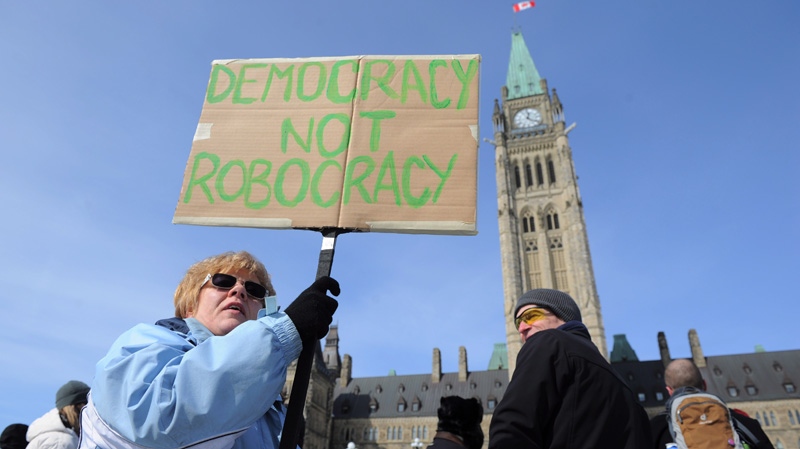 Protesters take part in a robocall protest on Parliament Hills in Ottawa on Monday, March 5, 2012. (Sean Kilpatrick /THE CANADIAN PRESS)

OTTAWA -- The last unresolved legal appeal of the 2011 robocalls scandal is at an end after the Federal Court of Appeal tossed out a bid to overturn the federal election results from Guelph, Ont.

The judge's ruling states that a looming federal vote in October now makes it moot to further challenge the 2011 election outcome -- notwithstanding a raft of as-yet unsolved Election Act offences.

Kornelis Klevering, who ran for the Marijuana Party in Guelph, was seeking to overturn the Liberal victory in the riding on the grounds that thousands of eligible electors may have been misdirected by fraudulent, automated phone calls purporting to come from Elections Canada.

Klevering, however, launched his legal challenge of the Guelph election results too late under the rules, and a succession of courts rejected his suit on the grounds there was no evidence the fraudulent calls affected the actual election outcome.

A single, junior Conservative party worker, Michael Sona, was convicted and sentenced to nine months in jail for his role in the Guelph voter suppression scandal -- a sentence that is being appealed by both Sona and the Crown.

Justice Wyman Webb, writing the unanimous ruling of the three-judge Federal Court of Appeal panel, found that Klevering's late application was enough on its own to dismiss the case.

But Justice Webb also wrote that even if Klevering's appeal were to go ahead, "it is unlikely that any such hearing could be concluded before there is another general federal election, which would render his request to annul the 2011 election in Guelph moot."

The judgment may signal a legal end to long-simmering concerns over the conduct of the May 2011 general election.

At least three different court cases have examined the voter suppression scheme and all have found evidence it extended beyond a lone, junior campaign worker in Guelph.

Last August, Judge Gary Hearn of Ontario Superior Court ruled Sona "did not likely act alone" while finding him guilty of involvement in the Guelph robocalls.

In Klevering's case, Federal Court prothonotary Martha Milczynski ruled that "Guelph may be singled out as one of if not 'the' most egregious example of the voter suppression efforts," even as she rejected his annulment bid.

In May 2013, Federal Court Judge Richard Mosley ruled in a civil case that fraud did take place "in ridings across the country" but he could not overturn results in six contested ridings because there was not enough evidence to prove the fraud influenced the outcomes.

Mosley's judgment concluded that the "most likely source of the information used to make the misleading phone calls was the CIMS database maintained and controlled by the (Conservative Party of Canada), accessed for that purpose by a person or persons unknown to this court."

Mosley found no evidence that use of the Conservative database was condoned by the party.

"Rather, the evidence points to elaborate efforts to conceal the identity of those accessing the database and arranging for the calls to be made," he ruled.

Steven Shrybman, the lawyer who pursued the robocalls civil case on behalf of the Council of Canadians, said Tuesday that questions remain over who accessed the password-protected CIMS database in the days just before the May 2, 2011 vote.

Shrybman said that for "practical purposes" the 2015 election probably makes the 2011 robocalls scandal an unsolved crime.

However he noted it took seven years to get a conviction this spring of former Peterborough, Ont., Conservative MP Dean Del Mastro on 2008 election offences.