KITCHENER, Ont. -- A Kitchener inventor, who says he was "definitely" inspired by the comic hero Iron Man, has demonstrated a homemade exoskeleton by lifting a car for a German TV crew.

James Hobson says the lift, using the legs of his exoskeleton, was about 360 kilograms, adding that the legs are rated for about 700 kilograms.

Hobson says he's been dabbling in exoskeletons for about two years and built an upper body exoskeleton last year and curled nearly 135 kilograms with it.

Since then he has quit his job to focus full-time on exoskeletons and YouTube and started building the legs -- which he describes as a "very early prototype" costing about $1,000 -- a few weeks ago.

Hobson says he'd been collecting parts for two years and -- like the Marvel superhero's alter ego Tony Stark -- modified and cobbled them together into the leg portion of the exoskeleton. 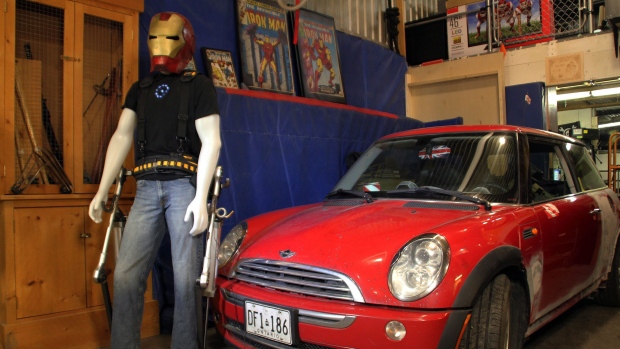 James Hobson's homemade exoskeleton legs, which he used to lift a Mini Cooper, are displayed on a mannequin in his garage in a handout photo. Hobson says he was inspired to work on the exoskeleton by the Marvel superhero Iron Man.THE CANADIAN PRESS/HO-James Hobson

Hobson says the motivation to get the legs built was the German TV show "Galileo" coming to film the Mini Cooper lift, which he says was the test for his design.

"We wanted to show the German TV show something impressive," he said Wednesday.

"I have a project car, a Mini Cooper we're working on fixing up, so we thought hey, why not try lifting that?"

"The video was the test," Hobson said. "We didn't have time for anything else! I work better under pressure anyway."

Hobson moved to Kitchener from Toronto about a year ago, and said he bought the place because of the garage, which is larger than the house.

"It was built in the 80s for a trucker so he could park his big rig inside," he said.

"I call it the Inventorium! I've spent the past year renovating it on a shoestring budget, and it's starting to look like a proper little R&D facility," Hobson added.

Hobson hasn't yet begun work on an upper body for the exoskeleton.

"There's the old one, but that was the first prototype, it's to be scrapped," he said.

Hobson said he's planning to demonstrate the exoskeleton for Discovery Channel's "Daily Planet" show on Monday by lifting a truck -- which he estimates will be a lift of about 680 kilograms.