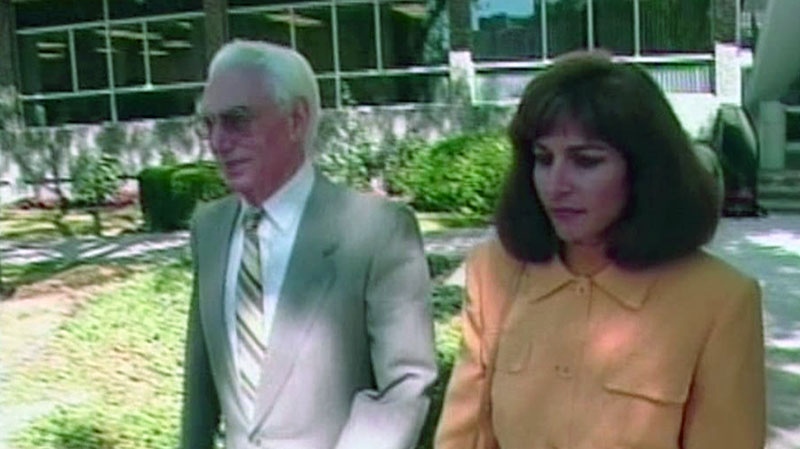 Helmut Oberlander is seen walking out of a courthouse in Kitchener, Ont., in this undated file photo.

TORONTO -- Jewish groups are calling on the federal government to immediately strip Canadian citizenship from a 92-year-old man who was once a member of a brutal Nazi death squad.

In a letter to Citizenship Minister John McCallum, the groups say it's time to put an end to what has been a 20-year battle to deport Helmut Oberlander.

"Mr. Oberlander was a member of one of the most savage Nazi killing units, responsible for the murder of more than 90,000 Jewish men, women, and children during the Holocaust," the letter states.

"He is here illegally, was associated with an horrific and murderous enterprise for which he has neither demonstrated nor expressed any remorse, and he ought to have his Canadian citizenship revoked immediately."

Oberlander recently won yet another reprieve when the Federal Court of Appeal set aside a ruling against him, and ordered the government to take another look at the case.

The ethnic German born in Ukraine has argued he had no choice when German forces conscripted him at age 17 in 1941 to serve as an interpreter in Einsatzkommando 10a, which was part of a force responsible for killing more than two million people. Most were civilians, and most were Jewish.

Oberlander immigrated to Canada in 1954 and raised two daughters. He became a citizen in 1960 and ran a construction business in Kitchener, Ont. The government first began trying to strip him of his citizenship in 1995, prompting the protracted court battle.

The Jewish groups, including Canadian Jewish Holocaust Survivors and Descendants, the Centre for Israel and Jewish Affairs and B'nai Brith Canada, say enough is enough.

"It is particularly stressful for members of our survivor community, who are law abiding and responsible citizens, to know that a member of the vicious killing unit Einsatzkommando 10a remains in Canada illegally," they write.

"Contriving to abuse the judicial system to avoid responsibility and accountability is itself offensive and undermines the integrity of our immigration process."

Oberlander's lawyer called the letter "inaccurate and irresponsible" and urged McCallum to leave his client alone.

For one thing, said Ronald Poulton, no one has ever alleged that Oberlander himself committed any crimes or even had any hand in them. Instead, the government found him complicit in international crimes simply because of his association with the death squad. The Supreme Court of Canada has since ruled that's not enough to implicate someone.

"The letter is irresponsible because it suggests that Mr. Oberlander has abused the justice system by fighting and winning his cases," Poulton said.

"This implies that any one who fights injustice is abusing a system because he never gives up."

Oberlander was a forced conscript made no significant contribution to its crimes, said Poulton, adding it is wrong to pursue him for crimes he never committed.

The Jewish groups have also started a petition urging McCallum to act right away.

The minister did not immediately respond to a request for comment.