The managers of a Waterloo nightclub are apologizing for a video which shows a group of employees holding an inappropriate sign.

The video was taken over the weekend at “The Drink Uptown” on King Street North.

In it, several male employees can be seen carrying the sign which reads: “I thought she was 18.” 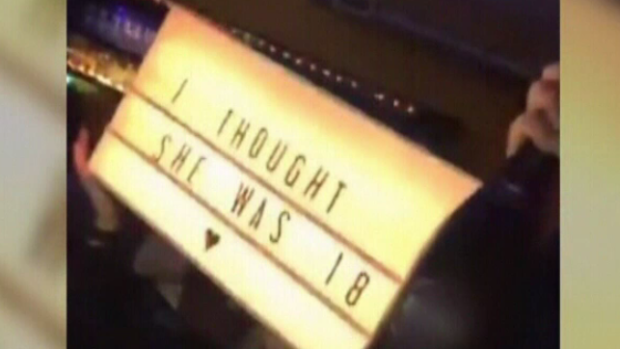 The video has sparked a range of responses. Some say the sign was meant as a joke, while others argue that it makes light of sexual assault.

“Totally, totally wrong,” said another. “Whoever thought of it, didn’t think.”

Chad Yurkin, one of the managers at “The Drink Uptown”, has apologized for the incident.

He says a group of VIPS requested the custom sign as part of the club’s bottle service.

“Some of our servers brought the sign out and we were unaware of the messaging on the sign. Usually those signs say ‘Happy Birthday.’ It turns out this message was an inappropriate message.”

“One change we’ll be implementing immediately will be to ensure that management oversees and approves any of the signs that go out onto the floor.”

The club also has plans to set up sensitivity training for its employees, including servers, bartenders and DJs.

Yurkin hopes that other establishments will also learn from this incident.