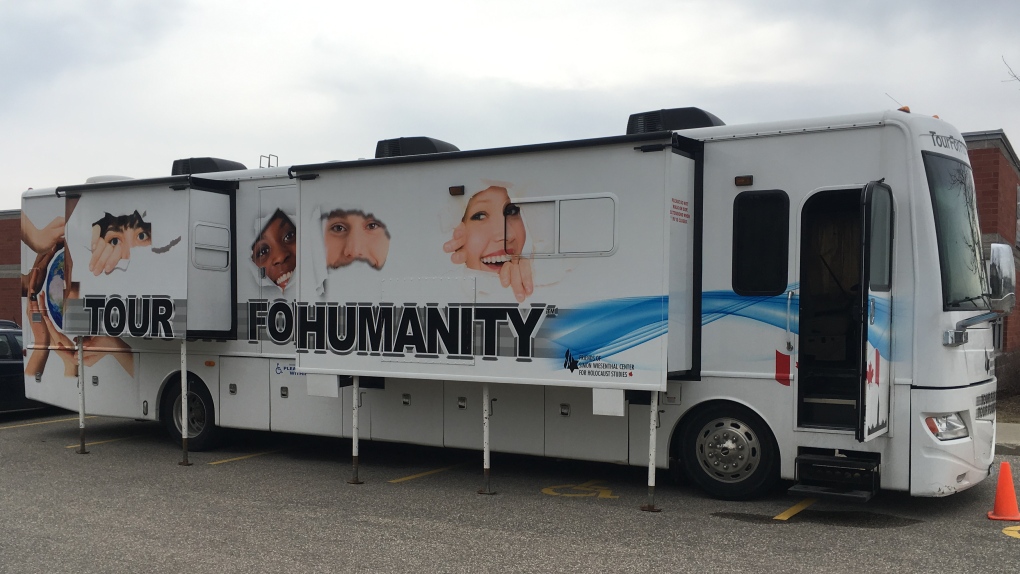 The Tour for Humanity bus made a stop in Waterloo on Thursday. (Dan Lauckner / CTV Kitchener)

A touring bus of human rights made a stop in Waterloo on Thursday.

The Friends of Simon Wiesenthal Center for Holocaust Studies tour stopped at an elementary school, and it’s thanks to one of its students.

Rosie, a seventh grade student at St. Luke’s Elementary School, won second place in the centre’s annual speech contest. That won her and her classmates the experience of a presentation on the bus.

Daniella Lurion runs the program and says it’s the first time it’s been in Waterloo. Students learned about residential schools, the Chinese head tax and anti-Semitism throughout Canadian history. For at least one student, the experience was eye-opening.

“We learned how Canada actually only let in 5,000 Jews from Germany to escape the Holocaust over the whole period, almost 12 years of war, and how we kind of pushed them away,” says Elyze Ruchty. “But we don’t really talk about that now.”

The focus of the 30-seat, state-of-the-art centre is learning from the past in order to move forward.

Lurion says it’s important for kids to understand that the rights and freedoms we have aren’t guaranteed if we’re not careful with them.

The tour also made a stop in Cambridge recently.

The centre has a brick-and-mortar location in Toronto, but the tour is an opportunity to make the experience available around the area.