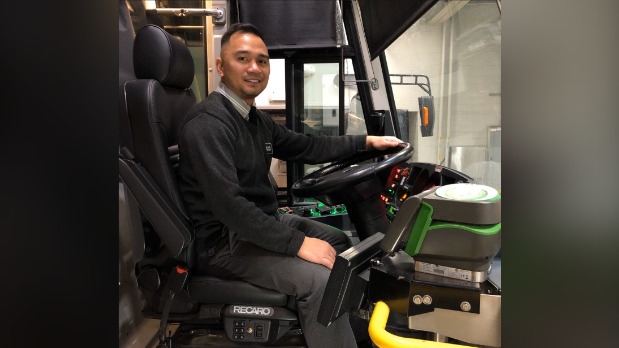 Bryan Jeresano, a GO bus driver of seven years, is being recognized for his efforts to help an 18-year-old woman being followed by two men.

KITCHENER -- A GO bus driver is being recognized for his efforts to help an 18-year-old woman in Guelph who was being followed by two men at night.

Trinity, whose last name is being withheld by Metrolinx to protect her safety, was waiting for a bus to take her to the University of Guelph when she noticed a car with two men in it slow down as it passed her.

According to Metrolinx, the student says that when one of the men got out of the car quickly and tried to approach her, she began walking away from the bus stop in fear for her wellbeing.

During the interaction, Bryan Jeresano was driving a GO bus nearby and noticed the woman was in distress.

“As a bus driver, I am used to seeing beyond the ordinary, to really pay attention to details, for anything extraordinary," said Jeresano in a post to the company's website.

Jeresano, a GO bus driver of seven years, said that he recognized the woman who had been taking the bus over the past few months and could tell by the look on her face that she was fearful.

He says he knew something was wrong and stopped his bus near Trinity, which triggered the men to drive off.

“If it wasn’t for this amazing human being, and his quick reaction, I don’t even want to think what would have happened to my daughter,” said Jenni, Trinity’s mother told a Metrolinx representative.

Once Trinity was on the bus safely, Jeresano followed the car to get the license plate which he wrote on his hand and later reported to police.

“She thanked me over and over again," said Jeresano. "This is when it hit me that she was genuinely terrified. And I was so happy to have been there to help her."

As a new father of a baby girl, the incident hit home with the driver.

“I couldn’t tell my wife about it right away as it was still surreal,” he said. “But it really made me think about my little girl and hope that someone helps her if she ever feels threatened someday.”

Jeresano will be receiving an award from Metrolinx for his dedication and commitment to public safety for his actions that night.

Guelph police confirm to CTV News that the incident was reported and there are no updates on the investigation at this time.