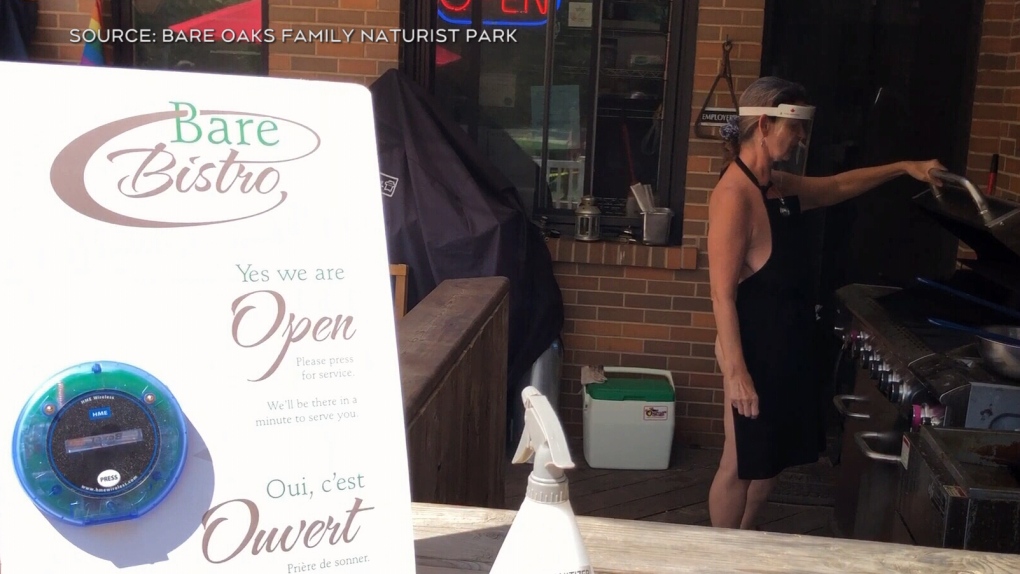 A woman cooks at a barbeque at the Bare Bistro at a naturist resort near Newmarket, Ont. (Courtesy: Bare Oaks Family Naturist Park)

KITCHENER -- After months of COVID-19 related closures, naturists are removing the shackles of life in quarantine by removing their clothes.

“There’s something about taking your clothes off that makes you feel like you’re really finally losing all the shackles of society and all the rules,” says Stéphane Deschênes, owner of Bare Oaks Family Naturist Park near Newmarket, Ont. “You almost feel cleaner because your body is breathing and you can feel the sun on your skin. Makes you feel very alive.”

And Deschênes is not alone. The naturist resort has been welcoming more visitors than usual during this time of year, especially thanks to sunshine and summer-like temperatures last weekend.

“We were unusually busy,” he says. “I think people had a ton of cabin fever.”

He says he's looking forward to welcoming even more visitors now that the Ontario government is allowing all short-term rentals.

Meanwhile, at Ponderosa Nature Resort in Freelton, Ont., there’s been an increase in the number of inquiries about memberships and permanent residences.

“I think people are looking ahead at the future of travel,” says resort spokesperson Shawn Rutledge. “We have a lot of snowbirds that season here who are anticipating not being able to snowbird this coming winter. So those people have started to inquire about permanent residence, as well.”

It’s still unclear, though, what restrictions will still be in place during the upcoming snowbird season.

Amenities at both Ponderosa and Bare Oaks, such as pools and saunas, are off limits and new safety measures have been put in place.

At Bare Oaks, everyone is asked to maintain physical distancing, not to gather in groups of more than five people, and to wear masks while using the washrooms.

Travel restrictions are also a concern in the Ontario naturist industry, which relies on tourists from south of the border and other provinces.

“Overall, in the long term, it will affect us because we won’t be able to have our American visitors and right now we can’t even have people from Quebec, and a lot of people come from Quebec, as well,” says Deschênes.

Whether they’re long-term tenants, seasonal visitors or out-of-town guests, all naturists at the park help create a sense of community.

“It’s really important because you can’t get it just anywhere else. There are very few places you can go,” he says.

Some naturists are getting their sense of community by baring it all online.

A U.K. nudist organization is making an effort to bring naturists together through virtual pub or morning coffee meetups and naked yoga.

British Naturism has gained over 370 members since the pandemic began and has seen an increase in the number of people signing up for online events.

“The number of new people joining us has almost tripled since the beginning of the U.K. lockdown at the end of March,” says British Naturism’s commercial manager, Andrew Welch.

Now that more people are working from home, Welch believes fewer people are worried about what to wear – or haven’t bothered with clothes at all.

“People have discovered that, contrary to popular belief, it’s nice to be naked and not shameful, ridiculous, harmful,” he says.

“Being naked with other members of your household isn’t weird, provocative or in any way negative. In fact, you feel human again. What’s the point of wearing hot, sticky clothes when the weather is warm?”

At a time when people may be experiencing feelings of fear and anxiety, Welch says not wearing clothes doesn’t seem so shocking or eyebrow-raising.

“The world has changed and we’re rewriting the rules,” he explains. “Unusual might be the new usual.”