The charges against two brothers accused of assaulting a customer with a service dog at a Kitchener, Ont. restaurant have been withdrawn.

All charges against Louis and Athanasios Gianopoulos were withdrawn in court on Tuesday at the request of the Crown after the brothers made a combined $3,000 donation to the Canadian National Institute for Blind and wrote letters of apology to the customer, a representative of the defense team said.

Louis and Athanasios Gianopoulos are the sons of the owner of Milton’s Restaurant in Kitchener.

As part of the agreement, prominent signage welcoming service dogs has been put up at the restaurant along with water dishes at multiple entrance points, the defence said.

On Nov. 10, 2021 police responded to Milton’s Restaurant after receiving reports of a man being assaulted. A widely-shared video of the incident shows two men forcibly removing a man with a service dog from the premises.

The clip sparked outrage online and a small protest at the restaurant.

Justin Leckie, the man with the service dog in the video, spoke with CTV News the day after the incident happened.

He said he was seated when two men approached him, demanding to see his service dog’s certification.

Leckie, who lives with Asperger’s, said the dog is a comfort to him.

“I don’t just show my papers to anybody,” he explained. “She helps me with general anxiety, panic attack, depression, that type of thing.” 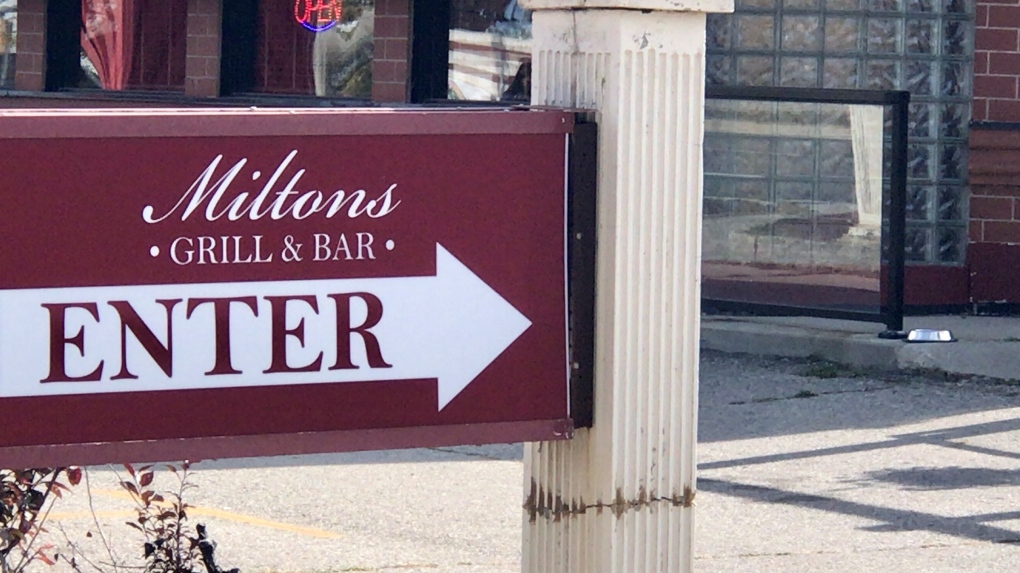 A water dish is seen outside Milton's Restaurant in Kitchener, Ont. on Oct. 4, 2022. (Dan Lauckner/CTV Kitchener)

Leckie said he was holding the dog’s papers when he was asked to leave the restaurant.

“I resisted because I said, ‘No, I haven’t done anything wrong,’” he says. “They weren’t having any of it. They said if you don’t get up right now we’re dragging you out right now. And they did.”

“Of course we want everybody to come here, we’re a business,” Dionisios Gianopoulos said in a Nov. 12 interview. “We had nothing to do with the dog. We said the dog has to have a permit. You don’t show [it], [the] dog's not allowed.”

After a two-month investigation, police charged Louis and Athanasios with one count of assault each on Jan. 10, 2022.

WHAT DOES THE LATEST DEVELOPMENT IN THE CASE MEAN?

The charges against the Gianopoulos brothers were withdrawn as part of a diversion process – where the Crown and defence come to an agreement that avoids going through the traditional criminal justice system.

Tuesday's resolution means the two men will not have criminal records.

“They could have had someone plead guilty and pay a $50 fine… [or] get a discharge on probation, or you could have the matter diverted,” Goldkind said.

“This is a very, very smart clever result worked out by the defence and Crown, and it’s to be applauded.”

But Goldkind said this resolution does not mean there wasn’t any wrongdoing, noting the charges wouldn’t have been withdrawn unless the brothers followed through on the terms of the agreement, including writing the letters of apology, making donations to the CNIB and adding signage and water dishes at the restaurant.

“There are certainly legal consequences here for the brothers. No one should think this was dismissed or withdrawn without cause, this is the way the criminal justice system works when it can be creative to avoid labelling people as criminals,” Goldkind said.

CTV Kitchener reached out to Justin Leckie's family and the owner of Milton's Restaurant but neither were available for an interview Tuesday.