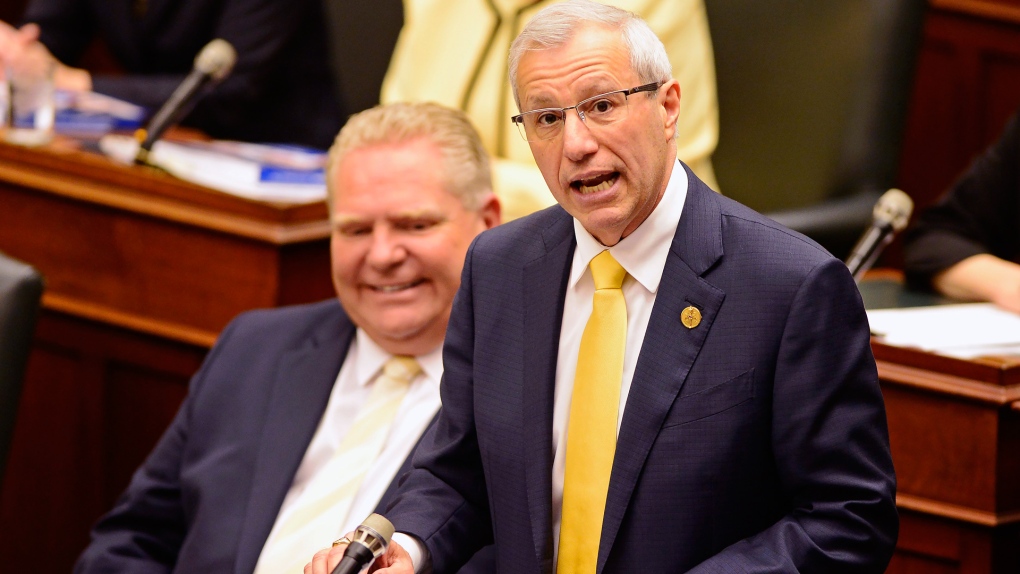 Ontario Finance Minister Vic Fedeli presents the 2019 budget as Premier Doug Ford looks on at the legislature in Toronto on Thursday, April 11, 2019. THE CANADIAN PRESS/Frank Gunn

Ontario's books won't be balanced within the Progressive Conservatives' mandate, but the government's first budget serves up an era of gradual belt-tightening with a side of booze.

The Tories peg the current deficit at $11.7 billion, and they don't expect to eliminate the red ink until 2023-24. Drastic and widespread cuts that many had feared did not materialize in this budget, but the path to balance shows that much of the heavy lifting comes at the halfway mark to the next election, and after it.

The budget constrains spending growth -- and shows cuts in post-secondary and social services -- but the $163.4 billion package is still nearly $5 billion larger than the last budget from the previous Liberal government, who the Progressive Conservatives often slam for their spending habits.

"We have developed a reasonable path to balance," Finance Minister Vic Fedeli said. "Our path to balance in five years is a thoughtful and a measured approach to take...Our entire premise is to protect what matters most."

Program expenses will rise over three years by an average of 0.8 per cent, compared to the 3.3 per cent in growth that the former Liberal government planned.

One new goodie is a child-care tax credit, providing up to $6,000 per child under seven and up to $3,750 per child between seven and 16, on a sliding scale for families earning less than $150,000 annually. It's expected to cost about $390 million a year. They are also promising to create 30,000 child-care spaces over five years.

Free dental care will also be provided for low-income seniors.

The opposition parties questioned why Premier Doug Ford's government was "obsessed" with booze.

The budget also reveals a new Ontario trillium logo -- virtually identical to a previous iteration -- as well as a largely blue licence plate redesign and an accompanying new slogan, "A place to grow." The government spent $500,000 on a consultation on branding, but has a new contract for licence plate production that saves $4 million.

"It is ... use of public money for partisan purposes," she said. "It's just shameful that this is a priority of Doug Ford, to have his ego on the back of everybody's car."

"I think it will cause a lot of rear-ending," she joked.

But Horwath said that even in areas where spending is increasing, it's mostly below the rate of inflation, which she said amounts to cuts.

Hospitals are getting an additional $384 million, which amounts to an increase of 2.05 per cent, but the Ontario Hospital Association had said the sector needs a 3.45-per-cent increase to maintain staffing levels.

Education spending is set to rise by 1.2 per cent, but that growth is largely due to higher student enrolment, instead of new programs. Ontario recently announced a host of education changes, including larger high school class sizes, which sparked widespread anger.

The post-secondary sector will see funding cuts, with spending dropping one per cent on average for the next three years, largely due to changes to student financial assistance.

Universities and colleges will also see more conditions on their money, with up to 60 per cent of post-secondary funding tied to institutional performance over the next five years. The government could not specify what criteria will be used to evaluate performance, saying it will work with institutions to develop them.

Changes such as social assistance reforms, closing spaces and facilities in the youth justice system, and "streamlining" administration are expected to help reduce children's and social services sector costs by $1 billion -- or two per cent -- over three years.

The justice sector is expected to see about two per cent in cost cuts too, including changes to legal aid and victim compensation services and amalgamating adjudicative tribunals.

Ontario has also started looking at how to constrain growth in public sector wages.

For businesses, faster write-offs on capital investments are expected to provide $3.8 billion in corporate tax relief over six years. That allowance is instead of cutting the corporate tax rate from 11.5 per cent to 10.5 per cent, as the Tories had promised in the election. They say this move will benefit businesses more.

Ontario Chamber of Commerce president and CEO Rocco Rossi said if he had to choose between the two measures he prefers the capital allowance.

"We have been lagging significantly in terms of productivity measures vis a vis our global competitors -- this is an important step," he said. "We'd like to see, eventually, that corporate tax rate come down."

The budget contains no new taxes. In addition to tackling the deficit, the government is also taking aim at the net debt -- currently pegged at $343 billion -- through ensuring surpluses and unused reserve or contingency funds go to paying it down.

As well, planned legislation would require the government to develop a debt burden reduction strategy, and make the premier and finance minister pay 10 per cent of their salaries for each missed reporting deadline for documents such as the budget and quarterly economic accounts.