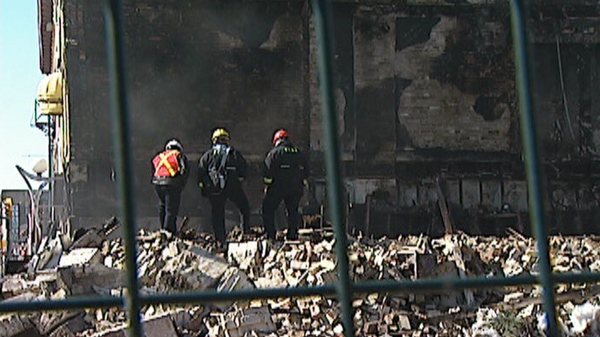 The location of the Stag Shop is seen a day after a large fire in downtown Kitchener, Ont. on Monday, March 28, 2011.

Fire investigators in Kitchener say the cause of the Sunday morning blaze will be officially listed as undetermined, but is suspected to be electrical.

An electrical problem in either the first floor ceiling or the floor of the second story near the front of the building is suspected to be the cause.

The fire, which closed King Street for several days, destroyed the Stag Shop and damaged nearby businesses.

The fire caused an estimated $500,000 in damage, and crews had to dig through the rubble to stabilize the area, delaying the investigation.

King Street is expected to be reopened late Wednesday.