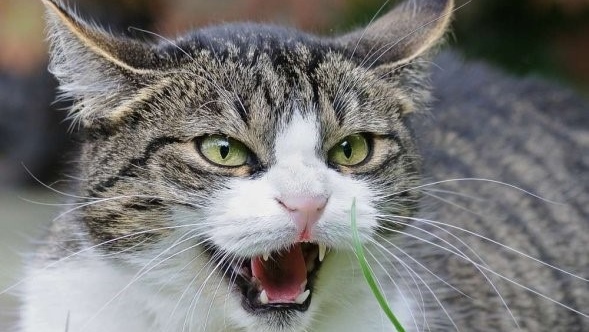 An aggressive cat is seen in this undated photo. (Christels/ Pixabay)

KITCHENER -- A study from the University of Guelph suggests that a cat owner and their training methods can play a big role in preventing aggressive behaviour.

Lead author Kristina O’Hanley, a PhD candidate at the veterinary college, found that the cats in the study showed less aggression if they received positive reinforcement to manage unwanted tendencies.

Cats would become aggressive to their owners, other people, and other cats more often when owners made loud commands like “no!” or held them by the scruff of their neck.

“Our research is focused on understanding why cats become fearful and aggressive, and on developing strategies for prevention and treatment,” said Dr. Lee Niel, a professor in the department of population medicine, in a Friday news release. “What we have found is that the types of training methods that people use in the home might play a role in cat aggression.”

The study was originally designed to explore how experiences as a kitten affect adult cat behaviour.

Data from animal shelters was used to analyze those early experiences, and then owners were surveyed about their later experiences with the cat in the home.

“Surprisingly, we saw few effects of early management of kittens in shelters on adult cat behaviour,” O’Hanley said. “Most of the effects that we saw related to how the cat was managed in the home after adoption.”

Numerous in-home actors were associated with aggressive behaviours in adult cats, including enrichment access, use of certain correction techniques and provision of outdoor access.

The findings show that 35 per cent of the cats included in the study had swatted at and bitten people and that female cats were more likely to show aggression toward owners and other cats.

In homes with many cats, there was a lower risk of feline aggression toward owners and other people.