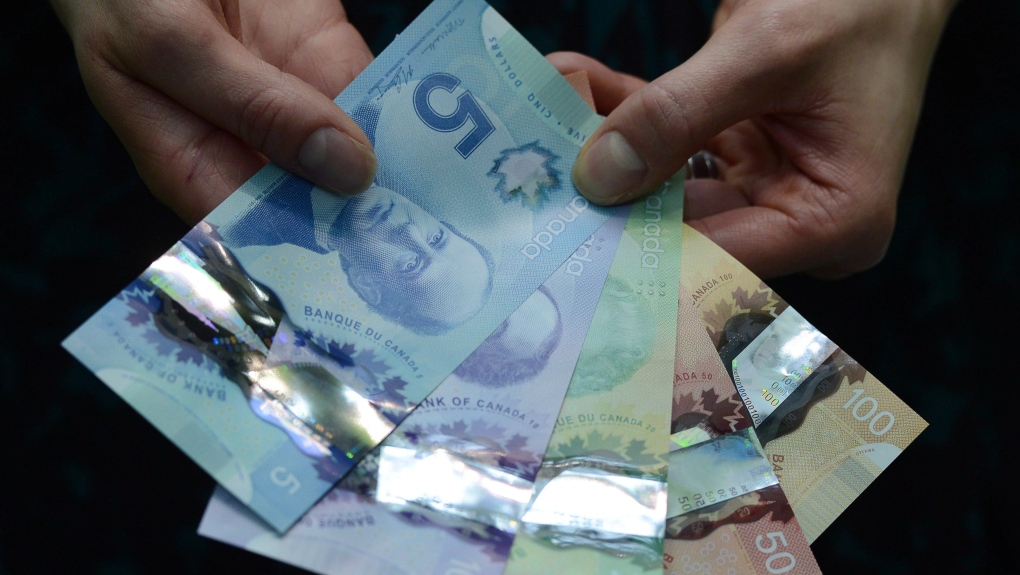 A representative with the Bank of Canada displays the polymer $5 and $10 bank notes alongside the $20, $50, and $100 during a press conference at the Bank of Canada in Ottawa on April 30, 2013. (Sean Kilpatrick/THE CANADIAN PRESS)

TORONTO -- Canada has officially entered a recession due to the economic devastation caused by the COVID-19 pandemic, the C.D. Howe Institute's Business Cycle Council declared Friday.

The council, which acts as an arbiter of business cycle dates in Canada, said the economy peaked in February before the steps taken to slow the spread of the coronavirus brought the economy to a standstill.

"Members agreed that by applying the council's methodology to the preliminary data available, Canada entered a recession in the first quarter of 2020," the council said in statement.

There are no hard and fast rules for determining a recession, though a commonly used definition is two consecutive quarters of negative quarter-over-quarter economic growth.

However, the C.D. Howe council defines a recession as a pronounced, persistent, and pervasive decline in aggregate economic activity and it looks at both GDP and employment as its main measures.

The March jobs report showed more than a million jobs were lost in the month, while a preliminary estimate by Statistics Canada suggested the economy contracted by nine per cent in the same month.

"The council agreed the magnitude of the contraction makes it extremely unlikely that any future adjustments will overturn the conclusion of a major drop in economic activity in the first quarter," the council said.

While the decline in March was record setting, economists expect the data for April will show an even bigger drop with the measures taken to slow the spread of the coronavirus in place for the entire month.

The council, which normally meets once a year in December, plays a role similar to that of the National Bureau of Economic Research in the United States in declaring if a recession is occurring or has occurred.

The ruling Friday came after a special meeting of the council this week.

Statistics Canada reported Thursday that economic growth had stalled going into the crisis, with real gross domestic product essentially unchanged in February due to teacher strikes in Ontario and rail blockades across many parts of the country.

The official estimates of GDP for March and the first quarter of 2020 will be released on May 29.

This report by The Canadian Press was first published May 1, 2020.