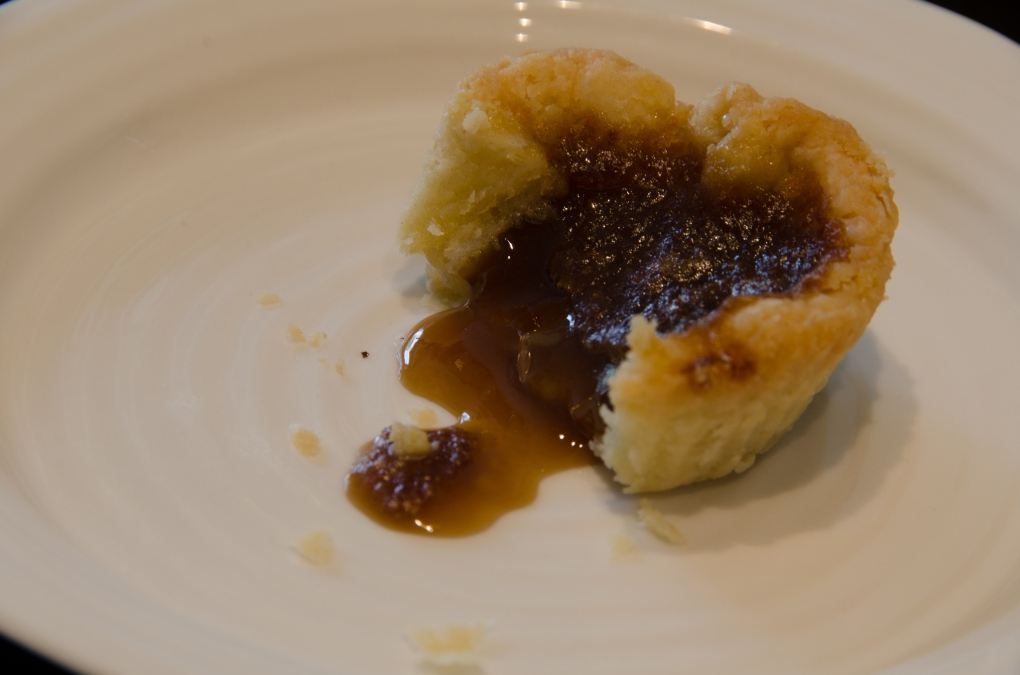 A butter tart with a runny centre is seen in this image taken from Flickr. (David Huang / flickr / CC BY-SA 2.0)

Currie says the local tarts are good. "They're just not exactly what we want."

When Barbara Rowlandson made and sold butter tarts in Midland, Ont., "complete strangers would stand around in my store and have discussions, arguments, an hour at a time, about what makes the correct butter tart," she says.

To aficionados, the smallest differences are a big deal. Purists say true butter tarts should not contain raisins or nuts. For Currie and March of Wasaga Beach, Ont., they have to have raisins.

Margaret Arnold of Maple Valley, south of Collingwood, Ont., has made and sold thousands of butter tarts in the last six decades from a recipe she developed.

"I searched different recipes in different books, but I always felt they were sooo sweet," she says. "So I went from there, using less sugar and more eggs, and found people liked them because they weren't so deadly sweet."

Now, at 91, she makes tarts mostly for family but still has one customer who orders three or four dozen for an annual event.

Butter tarts are almost unknown in the U.S., although southern pecan pie is similar, and food historians differ on their origin. Some say they're descended from sugar pies made by early Quebec settlers. Others say they may be related to a tart made in southern Scotland. Most agree the first written reference here was a recipe called A Filling for Tarts in a 1900 cookbook compiled by The Women's Auxiliary of Royal Victoria Hospital in Barrie, Ont.

It's not surprising, then, that while butter tarts are known in all parts of Canada, southern Ontario has laid claim to them in a big way. Two different areas have tied butter tarts to tourism initiatives, and on June 13 the Midland BIA will hold its third Ontario's Best Butter Tart Festival.

In 2006, Wellington North Township in Wellington County started the Butter Tart Trail to draw tourists to sample the butter tarts of area bakeries and restaurants. Nine businesses make and sell butter tarts and butter tart-inspired dishes such as sundaes, trifles and milkshakes.

It was the debates in Rowlandson's Midland store that prompted her to propose a festival, and as the event manager she finds its success "mind-boggling."

The festival also has two contests for the best butter tarts -- one each for professionals and home bakers -- limited to Ontario entrants. There are cash prizes, but it's mostly about the fun and bragging rights, Rowlandson says.

The first two years focused on "traditional" butter tarts, but this year entrants will be allowed to "freestyle."