Artist traps himself inside banana barrier at Kitchener City Hall

If you find yourself in downtown Kitchener, you might want to help yourself to a banana – and break down a racial barrier at the same time.

It’s all part of The Well, an installation by Toronto artist Zhaoyi Kang, a Chinese immigrant to Canada.

Wednesday morning, Kang constructed a round, well-shaped barrier out of hundreds of bananas outside Kitchener City Hall. By the afternoon, he had trapped himself inside – metaphorically, if not literally.

Iga Janik, who works for Cambridge’s Idea Exchange and helped curate and produce The Well, says the literal barrier is “a stand-in for the racial barriers that we continue to have in society.”

In Kang’s case, Janik says, the biggest barrier faced is a language issue.

“His Chinese has lost his accent, so he doesn’t feel native in Beijing anymore when he goes back, and yet here in Canada he hasn’t really been welcomed as one part of our full society,” she says.

While some people might initially feel uncomfortable taking the bananas from Kang’s well, Janik says that’s exactly what he wants – because as every banana disappears, so too does part of the barrier separating him from Canadian society. 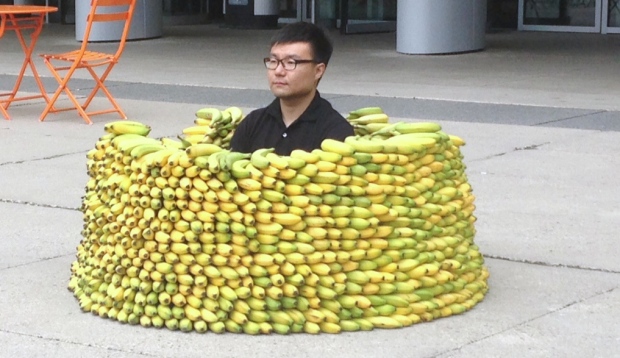 Janik said people had been “very generous” about removing bananas from the installation during Kang’s first few hours inside of it.

The Well is part of the Contemporary Art Forum Kitchener and Area (CAFKA), which is taking place this month around Waterloo Region.