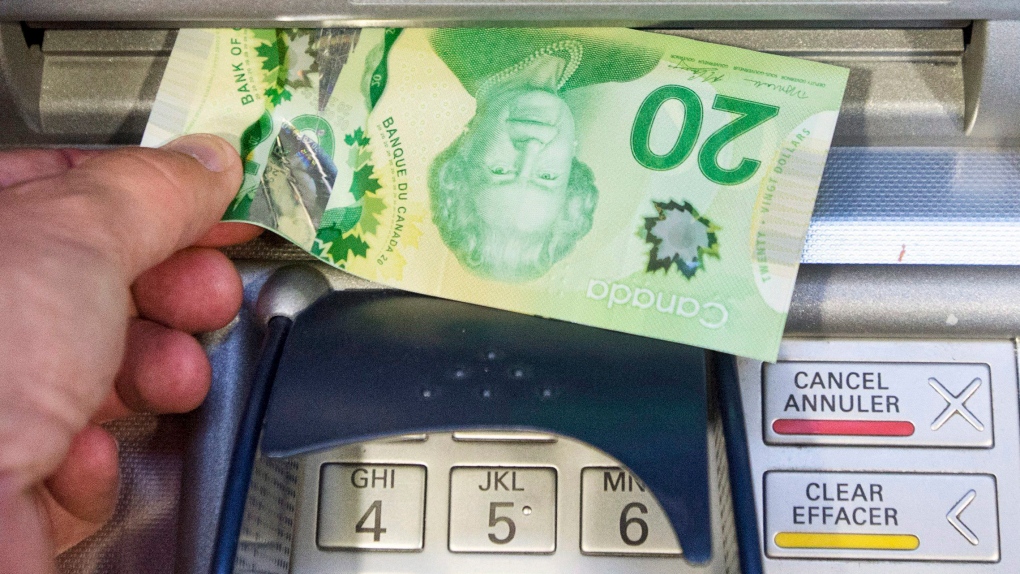 Money is removed from a bank machine in Montreal, Monday, May 30, 2016.(Ryan Remiorz / THE CANADIAN PRESS)

OTTAWA -- The annual inflation rate was 1.9 per cent in September for a second-straight month, keeping the indicator close to the Bank of Canada's ideal two per cent target.

Inflation has now stayed at 1.9 per cent or higher for seven consecutive months.

The country's price picture, on its own, is not applying pressure on the inflation-targeting Bank of Canada to adjust interest rates. The central bank's next rate announcement is scheduled for Oct. 30.

The average of Canada's three measures for core inflation, which are considered better gauges of underlying price pressures by omitting volatile items like gasoline, moved up slightly to 2.1 per cent last month from two per cent in August. The core readings are closely monitored by the Bank of Canada.

Royce Mendes, senior economist for CIBC Capital Markets, said with all the inflation data so close to target they're unlikely to change the timing of the Bank of Canada's next policy move.

"I think, at this point, the Bank of Canada is really looking at how the slowing in global growth and the trade tensions between the U.S. and China are affecting Canada," said Mendes, who predicts the central bank's next move -- a cut -- to come in January.

Statistics Canada said a 10 per cent drop in gasoline prices compared with last year continued to weigh on the overall inflation rate. Gas prices, year-over-year, were down 10.2 per cent in August and 6.9 per cent in July.

Excluding pump prices, the inflation reading for September was 2.4 per cent for a third-straight month.

Upward momentum in price growth was also held back in September by lower costs, year-over-year, for internet access services, tuition fees and telephone services. On a month-to-month basis, airfares saw a big drop, falling 19.5 per cent.

Shoppers shelled out 3.4 per cent more for passenger vehicles last month than they did a year earlier as price growth in the category exceeded 2.5 per cent for a seventh-straight month, the report said. Statistics Canada called it the "strongest continuous stretch of growth" in the category since early 2017.

Year-over-year mortgage interest costs have increased through 2019 and were up another 7.5 per cent in September. The report said the growth has followed a series of interest rate hikes by the Bank of Canada between July 2017 and October 2018.

In terms of downward forces, the report said tuition fees decreased 3.6 per cent last month for the category's first year-over-year decline since its creation in 1973. The drop was driven by an 8.9 per cent decrease in Ontario, where the provincial government cut tuition for the 2019-20 academic year.

Overall, economists on average had expected inflation of 2.1 per cent for September, according to financial markets data firm Refinitiv.

Looking ahead, Stephen Brown of Capital Economics wrote in a research note Wednesday that he expects headline inflation to gradually drift down towards 1.5 per cent by early 2020.

Brown, a senior Canada economist, predicted that signs of lower inflation and below-potential economic growth in the coming months will encourage the Bank of Canada to cut interest rates in December.

This report by The Canadian Press was first published Oct. 16, 2019.