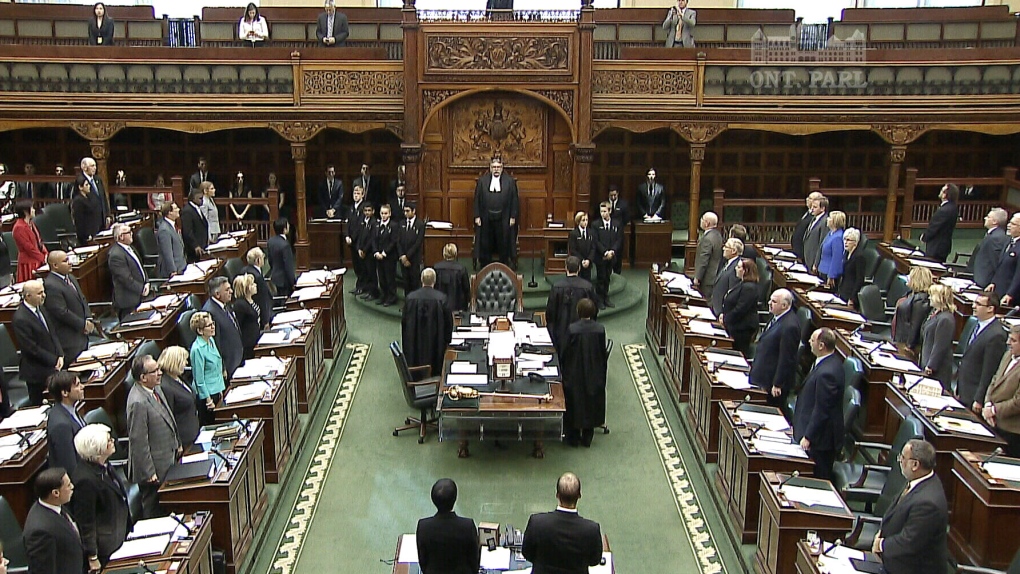 Queen's Park in Toronto, Ont. is seen in this undated file photo.

But some say they still question whether the province's Liberal government places a high enough priority on the estimated 1.9 million Ontarians living with physical, intellectual or developmental disabilities.

Over the next three years, the budget promises to pump $1.8 billion into services for developmentally disabled people and invest $2.3 billion into social assistance programs, which will loosen restrictions recipients have long contended keep them in poverty.

Advocates say disabled residents also stand to benefit from measures such as a $2.1 billion investment in mental health supports and a $650 million boost to home care programs.

But they say the budget, which comes ahead of a spring election, doesn't address concerns about the province's accessibility laws, since the fiscal plan doesn't contain funding to help the government enforce existing standards or develop new ones.

Implementation of the Accessibility for Ontarians with Disabilities Act (AODA) -- which promises full accessibility -- has fallen behind in recent years, advocates say, arguing the budget contains no plan to ensure the law is completely in place by 2025 as promised.

"It seems that whenever the government talks about listing people and making sure everybody's included, they just keep forgetting to explicitly include people with disabilities," said David Lepofsky, Chair of advocacy group AODA Alliance.

"I don't think they're against us, it's just we keep falling below the radar."

The Accessibility Directorate of Ontario, a government body, said the budget has several programs targeting disabled residents, some of which it described as historic.

"This budget has committed to a number of initiatives specifically aimed at improving the lives of people with disabilities," it said, noting the government was making "important progress" toward full accessibility.

The government also said a legislative review of the AODA led by former Lt. Gov. David Onley will soon begin. Lepofsky, however, questioned the transparency of the review, noting Onley once served as the province's special advisor on accessibility issues.

Ontario made Canadian history in 2005 when it enacted the AODA, legislation held up by some as a model for the federal equivalent set to be unveiled later this year.

But the law has faced controversy as advocates challenge the perceived weakness of standards it put in place. The government itself once declared that the move toward full accessibility had seen "a flag in momentum" as far back as 2015, and has also cut back the number of staff enforcing rules that do exist.

Most of the government's latest spending pledges, which encompass everything from transportation to schools to hospitals, do not explicitly contain language ensuring they'd be equally accessible to people with disabilities, Lepofsky said.

That, coupled with what he described as the inadequacy of existing laws, leaves him concerned Ontario's disabled population won't reap the same benefits from the government's spending spree as the rest of the province's residents.

But Lepofsky had praise for some budget measures, particularly the expansion of mental health supports and efforts to reform social assistance.

People enrolled in the Ontario Disability Support Program, for instance, will see their annual income rates rise nine per cent over the next three years.

The government also pledged to scrap tight limits on the amounts recipients were allowed to save up before having benefits clawed back, as well as loosen restrictions on the amount of employment income people could earn before losing provincial support.

Unlike many big spending commitments spread out as far as a decade, some of these income support measures are to take effect this year.

The same applies to expansions of a program supporting adults with developmental disabilities living in the community. The budget commits to giving participants extra funding that will bring their annual total up to $5,000.

"Did they go all the way? Did they do everything that needs doing? No. But they did address a lot of the things we asked for," Beesley said.

At least one advocacy group, however, said their views are not fully represented.

Anne Borden of Autistics for Autistics Ontario said nearly all government funding measures for people with autism focus on behavioural interventions for children.

Educators and parents are staunch supporters of such measures, but Borden said many adult autistics disagree with those interventions and feel the government's $62-million commitment should have been spent elsewhere.

"We looked at the budget and we asked ourselves, where are the job programs," she said. "Where are the higher education initiatives? ... Where are the services and programs that autistic people of all ages need?"

She urged the government to broaden future consultations to further include adults living with the disabilities the programs are intended to support.