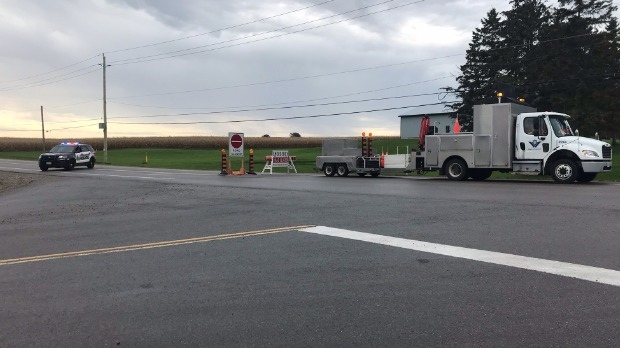 A 71 year-old woman was airlifted to hospital with life-threatening injuries after a crash in Wilmot Township on Wednesday.

A spokesperson with the Waterloo Regional Police Service said they were called to the scene in the area of Nafziger Road and Erbs Road around 11:45 a.m.

Investigators determined a GMC pickup was travelling south on Nafziger Road and crossed into the path of a Chevrolet SUV.

Police said the 71 year-old was driver of the SUV was trapped for some time and had to be extracted from the vehicle. She was taken by Ornge Air to a hospital in London with life-threatening injuries.

A 73 year-old male passenger of the SUV was taken to an out-of-region hospital with serious injuries. The 22-year-old man driving the pickup truck were also taken to a local hospital.

The investigation is ongoing and officials say charges are pending.

Anyone with information or who witnessed the collision is asked to call police.

ROAD CLOSURE:
On scene in the area of Nafziger Road, near Erbs Road, in Wilmot Township for reports of a collision between two vehicles.

Reports of serious injuries to occupants of one vehicle.

Area roads will be closed for a significant amount of time. Please avoid area. pic.twitter.com/kChFymemSe