Young people in K-W need to save for an average of 20 years to afford a down payment: report

Young people in K-W need to save for an average of 20 years to afford a down payment: report

Amanda Luloff lives in a two-bedroom apartment in Cambridge, but has been looking for a house to call home for years.

“Today’s housing market is very hard,” the single parent says. “I’m 43-years-old, I’m a single mom. I feel like I’ll never be able to own a home.”

While it’s not difficult to find people in Luloff’s situation in Waterloo region and across the country, a new report shows just how drastically housing prices have outpaced many people’s budgets.

Comparing average earnings to average home prices, the charitable think tank Generation Squeeze determined it would take a typical young person in Kitchener-Waterloo 20 years of full-time work to save a 20 percent down payment on an average-priced home.

“Ontario’s lost control of home prices more over a two year period than any other province at any other time in the last half century,” says Paul Kershaw, the founder and lead researcher of Generation Squeeze. 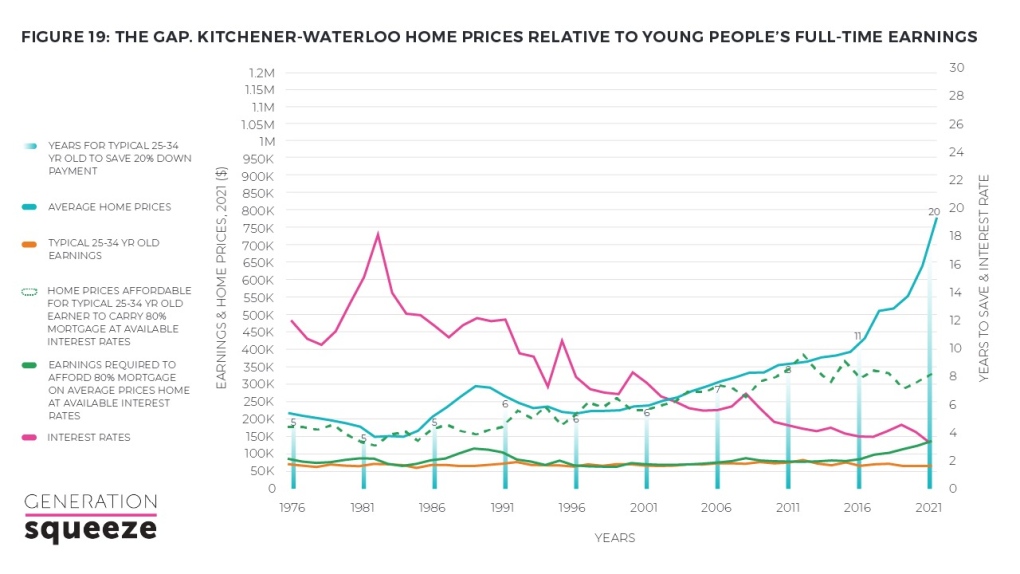 “Too often we tend to sort of individualize the harm that’s happening to younger Canadians in our housing market as opposed to talking about how our housing system is quite dysfunctional,” Kershaw says.

After analyzing data from the Canadian Real Estate Association and comparing it to Statistics Canada data on annual income, the report concludes that home prices should stall for years ahead or continue to fall moderately.

Alexis Soha with the Noble Realty Group in Kitchener says she has already seen a downward pressure in the cost of homes.

“I have seen a decrease in home prices, for sure,” Soha says. “Part of that is the rising interest rates that are factoring in. It’s costing more to own a house, especially now with inflation and the day-to-day cost of living. All of this is coming into play when it comes to impacting prices in the market.”

While Luloff saves every month for a home, she says it’s easier said than done and worries for her young daughter’s future when she too will need a home.

In its latest monthly release, the Waterloo Region Association of Realtors reports the housing market saw a continued cool down in November with the number of home sold year-over-year down by nearly 44 per cent and the average sale price dropping more than 10 per cent.

The stall is something Generation Squeeze argues needs to continue for many years ahead to make housing more attainable for would-be buyers.

Rent prices in Canada grew at a record pace last year as the country saw the lowest vacancy rate since 2001, the Canada Mortgage and Housing Corp. said.

The independent body that oversees the safety of technical systems and equipment in British Columbia has found a deadly ammonia leak near Kamloops last May was a tragedy that took years to unfold.

Ottawa police and Bylaw Services are telling residents and visitors they will be taking a zero-tolerance approach to parking, noise and fireworks violations downtown this weekend, on the one-year anniversary of the 'Freedom Convoy' demonstration.