A controversial development near Stratford’s downtown is a step closer to reality.

On Monday, council voted 7-4 to amend its Official Plan and redesignate land encompassing properties at 380, 388, 390 and 396 Ontario Street to allow for two, three-and-a-half storey, stacked townhomes to be built.

“You cannot ruin a neighbourhood by adding neighbours and so, we have to start to sort of think about – we’re talking about adding homes,” said city Coun. Kathy Vassilakos, in response to what she sees as heated rhetoric from those opposed to the plan.

The project would add 30 units and 47 parking spaces as currently proposed. However, residents voiced concerns the designs would not be in keeping with the heritage corridor into the city and would harm the character of the neighbourhood. 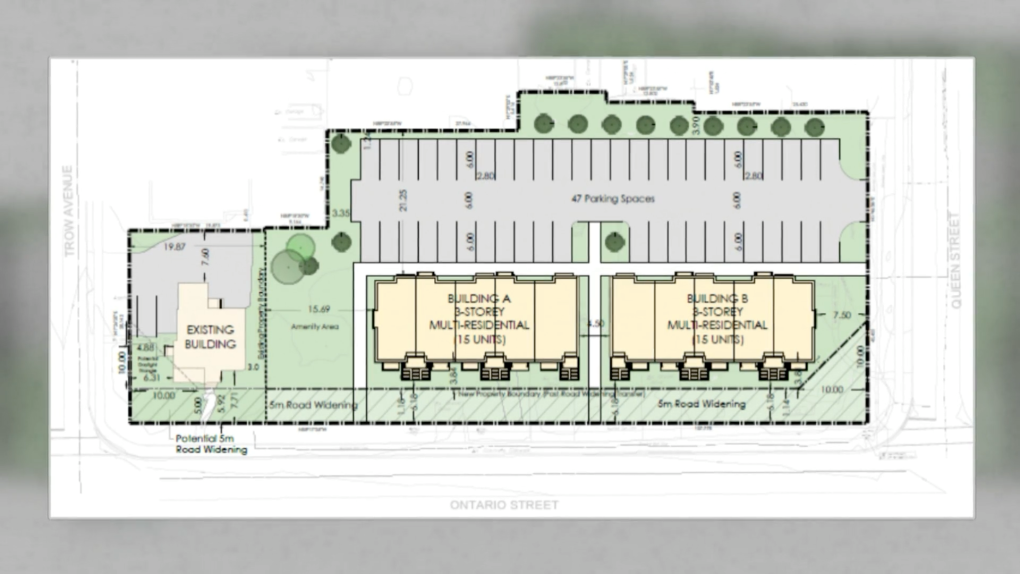 A proposed townhouse project in Stratford (Supplied: City of Stratford)

Hayden Bulbrook, a delegate to council speaking against the proposed development, said his career has brought him to London, but he hopes to return to his hometown of Stratford in the future.

Bulbrook also echoed a concern of other delegates that a change to the Official Plan to allow for the project could set a dangerous precedent.

“To come back won’t be coming back at all if Stratford just becomes another city when Stratford is no longer Stratford,” said Bulbrook. “Perhaps I sound dramatic but, this development will have tremendous impacts; impacts that may alter the fabric of our fine city.”

Administration assured council, in its view, the decision to amend the Official Plan is not precedent-setting.

City staff recommended the proposal because it met a number of planning goals – including intensification and housing targets.

“The proposed 30 units will result in adding diversity in the existing housing stock in the area and bring new units to market during a housing crisis,” said Emily Elliott, an agent for the applicant behind the development.

The group, SOS Stratford, organized to oppose the project as proposed and offered an alternative design of three quadruplexes as a compromise.

“Ultimately, the difference between our proposal and the developer’s proposal is something between six and 12 residential units,” said Gary Annandale, a delegate to council opposed to the proposal. “Are you really willing to radically change this area and upset a great many people across Stratford, and further afield, for a small number of additional residential units?”

Council unanimously approved bringing the site plan for the project before a future public meeting of council for final approval.

The site plan offers detailed designs of the future building and does not typically require council intervention.