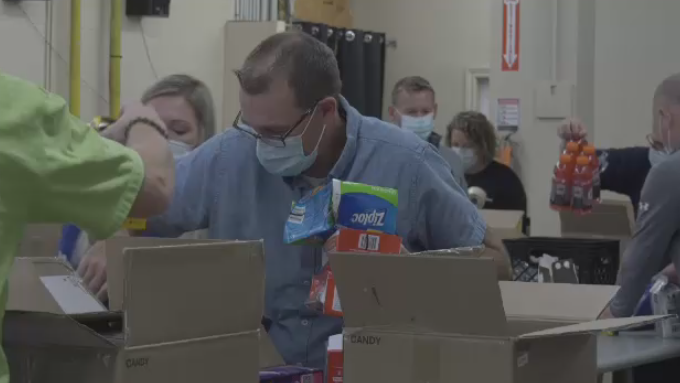 It's a time to give thanks and the Food Bank of Waterloo Region it’s also a chance to give back to those who are struggling with food insecurity.

“Holidays such as Thanksgiving tend to highlight the food insecurity right here in our region, but the reality is food insecurity is a long-year problem,” said Kim Wilhelm, interim CEO of the food bank.

Founded in 1984, the Waterloo Regional Food Bank was the “first organization of its kind” in Ontario dedicated to providing emergency food, according to Brittany Bortolon, with Durrell Communications.

She added: nearly four decades later, the food bank is still evolving to meet the growing needs of the region, working to ensure that residents don’t go hungry during their time of need.

Officials with the food bank explained that with high inflation, rising housing costs and continued supply shortages, there's still an urgent need for their services.

"There's no single reason why somebody may need food assistance, and right now we're seeing numbers like we've never seen before,” explained Wilhelm.

"There's many factors as to why somebody may need to use it, could be sudden job loss, an illness in a family, could be a large car repair,’ she stated.

According to the food bank, more than 1,300 households accessed food assistance programs for the first time in September of this year. That’s a 92 per cent increase compared to the same quarter in 2021.

The Food Bank of Waterloo Region and the Cambridge Food Bank are at the centre of the Community Food Assistance Network, a system of 100+ community programs and agency partners that provide food and support to people in need in our community, organizers explained.

Wilhelm said it's been hard to find popular food items, such as canned goods in large quantities and granola bars due to the supply chain shortages, which are just some of the challenges they continue to face.

"We rely heavily on donated products from our regional partners and corporate partners and due to the high cost of shortages they're not able to donate at the same level as they previously were pre-pandemic,” Wilhelm said.

Given these obstacles, the CEO said there's no better time to donate or volunteer than now.

"We know in the community, there is a need right and part of our mission and purpose is to help people in our community and really make them thrive,” said Trent Hilpert, president of Piller’s Fine Foods.

Oktoberfest has been answering that call for help for years now in the form of the Onkel Hans Food Drive.

"We know the past few years have been hard on a lot of people so, we're really trying to raise both financial donations and non-perishable food,” explained Allan Cayenne, Kitchener-Waterloo Oktoberfest president.

Wilhelm said residents can make a donation over the weekend in many different ways and they’ve got a program in place to match donations.

"One dollar equals three meals and thankfully, due to a partnership with Conestoga Meats, we're able to double the impact of one dollar and provide six meals,” she said.

“You can also make a food donation when you're out grocery shopping for your family at your local grocery store and put it in the food bin on your way out."

Additionally, volunteers will be along the parade route collecting food items and monetary donations on Monday.

The food bank says it wants people to remember that even a little, goes a long way.

A spokesman for the chair of an all-party parliamentary group says it is "carefully" reviewing how it handles events with outside events after a newspaper publisher accused of holding antisemitic views took part in a recent gathering.

A mass shooting survivor and spokeswoman for gun-control group PolySeSouvient says it is 'incredibly disrespectful' for firearm rights advocates to invoke the group's name in a merchandise sale discount code.

U.S. prosecutors on Thursday asked a judge to dismiss bank fraud and other charges against Meng Wanzhou, the chief financial officer of China's Huawei Technologies whose 2018 arrest strained relations between the U.S. and China.

Twitter has suspended rapper Ye after he tweeted a picture of a swastika merged with the Star of David.

The deaths of four University of Idaho students nearly three weeks ago have riled up thousands of would-be armchair sleuths, many of whom are posting speculation and unfounded rumors about the fatal stabbings online.

After 300 hours of testimony, 9,000 exhibits and a few major revelations, the public portion of on investigation into the first-ever use of the Emergencies Act ended Friday with a deep dive into questions about government accountability and transparency.

Hockey Canada says there were more than 900 documented or alleged incidents of on-ice discrimination -- verbal taunts, insults and intimidation -- across all levels and age groups during the 2021-22 season.