The Working Centre in Kitchener has unveiled plans to create 40 new housing units for people experiencing chronic homelessness at their 97 Victoria Street property.

The address, located directly across the street from what is now Waterloo region’s largest encampment, is currently home to St. John’s Kitchen. The soup kitchen provides access to meals, laundry, showers, health services and harm reduction supplies for people in need.

A point-in-time count done in September 2021 found that 1,085 people were experiencing some form of homelessness in Waterloo Region.

The Working Centre co-founder Joe Mancini said over 1,000 people eat at St. John’s Kitchen every month. The new vision for the 97 Victoria will create a place people can live safely and with dignity, he said.

"The need for this kind of housing is very high, if you just look around me here, this encampment demonstrates there's 50 people right here that would to have a decent place to live," Mancini told CTV News. 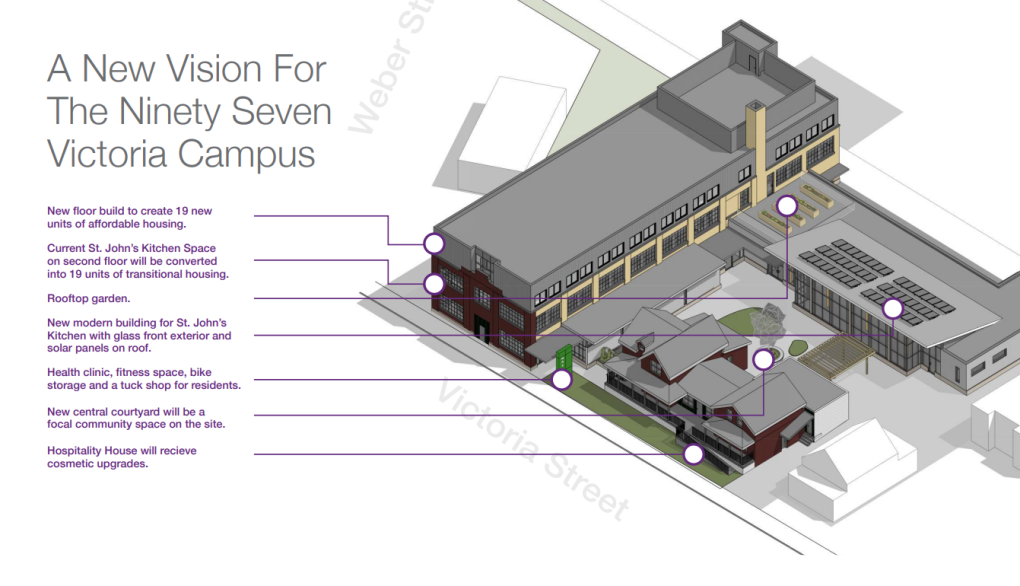 The planned redevelopment would see 97 Victoria transformed into a “campus-style” cluster of common areas, service spaces and housing, The Working Centre said.

St. John’s Kitchen would be expanded, and there would be access to healthcare and mental health supports on-site.

While the project's website says the development will include 38 units, Mancini said they've been able to squeeze a few more in for an even 40, since things are still in the planning phase.

The project is a partnership between The Working Centre and Perimeter Development Corporation and BNKC Architects.

Its $19 million price tag is expected to be mostlly covered by government grants and private contributions.

Perimeter Development has contributed $1 million “to kick off the capital campaign.” According to the project’s website, organizers are hoping to raise an additional $5 million from donations.

The Working Centre hopes to have the first residents move into the new space in December 2023.

PM Trudeau presents premiers $196B health-care funding deal, with $46B in new funding over the next decade

Before and after: How Toronto's MARZ uses AI to make motion picture magic

While much of internet is still buzzing about the wonders of ChatGPT, a Toronto-based technology and visual effects company is making its own splash in Hollywood using artificial intelligence.

As negotiations continue between premiers and the federal government, former Quebec premier Jean Charest is criticizing the feds' string-attached approach to health-care funding, stating that Ottawa should not be in the business of operating health-care systems.

A sensor you draw with a pencil could be used for 'smart diapers,' contactless switches and respiratory monitors

We may soon be able to detect humidity levels, respiratory changes or a too-wet diaper, all with a new type of sensor — one created by drawing with a pencil on specially-treated paper.

A 24-year-old man now linked to an unusual string of crimes that kept the Dallas Zoo on the lookout for missing animals told police that after he swiped two monkeys from their enclosure, he took them onto the city's light rail system to make his getaway, court records show.