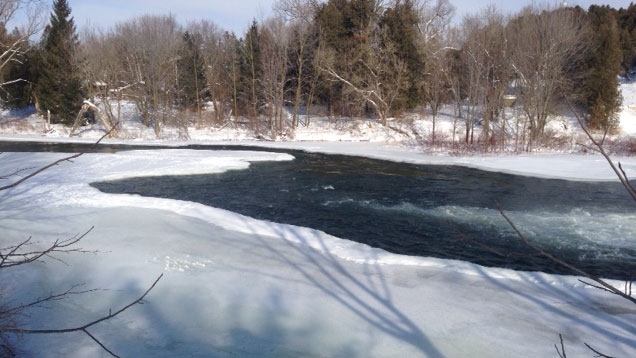 Adam Brunt died during a firefighter training exercise in Hanover, Ont., on Feb. 8. Twelve students were taking part in a training exercise for ice and water rescue on the Saugeen River, approximately 180 kilometres northwest of Toronto. (Scott Miller / CTV London)

TORONTO -- A legislative gap is exposing firefighters and firefighting students to unnecessary -- and potentially fatal -- risk, a New Democrat MPP said Thursday in calling for government oversight of the private safety training industry.

The recent death of a firefighting student during an ice rescue exercise run by a private company raises "many disturbing questions that must be answered" about an industry that is currently unregulated, Oshawa MPP Jennifer French wrote in an open letter to Premier Kathleen Wynne.

Firefighters "keep us safe, give us peace of mind and risk their lives in the service of others," French wrote.

"In return, it is the government's responsibility to ensure that they are not unnecessarily put at risk," she wrote.

Companies that provide specialty courses such a rope rescue or handling hazardous materials to fire departments, firefighting students and others aren't required to adopt the best practices established by the firefighting industry.

The Ministry of Labour doesn't have regulatory oversight because those undergoing training are not the employees of the companies providing the training, French said. Neither does the Ministry of Training, Colleges and Universities, she said in explaining her appeal to the premier.

A spokeswoman for Wynne referred the matter to the Ministry of Training, Colleges and Universities, which said courses offered by safety training companies are considered single-skill training and thus not covered by the Private Career Colleges Act. The Act regulates vocational training.

"It's this loophole that has to be closed," French said in an interview.

Students trust that instructors have the necessary qualifications to teach high-risk skills and that the proper equipment will be used, but currently have no guarantees, she said.

This month's training death in Hanover, Ont., wasn't the first such incident but it must be the last, she said.

Adam Brunt died during an ice rescue exercise run by a private company on February 8.

The course is not mandatory to become a firefighter, but Brunt's father said the 30-year-old signed up in the hopes it would help him get a job.

Police and the Ministry of Labour are investigating.

The ministry said the course was run by Herschel Rescue Training Systems, a Toronto-area company.

The company's owner and master instructor, Terry Harrison, was acquitted after being charged in 2010 under the Occupational Health and Safety Act in the death of a volunteer firefighter near Sarnia, Ont., according to court documents.

A judge ruled Harrison had not officially been designated as incident commander for the exercise, and thus could not be held responsible for the firefighters' safety, the documents show.

The municipality of Point Edward was fined $75,000, while charges against its fire chief were dropped.

Harrison said in an email he was invited to take part in the 2010 exercise but was not hired to lead it. He would not comment on this month's incident, citing the ongoing investigation.