Red paint back on Queen Victoria Statue in Kitchener 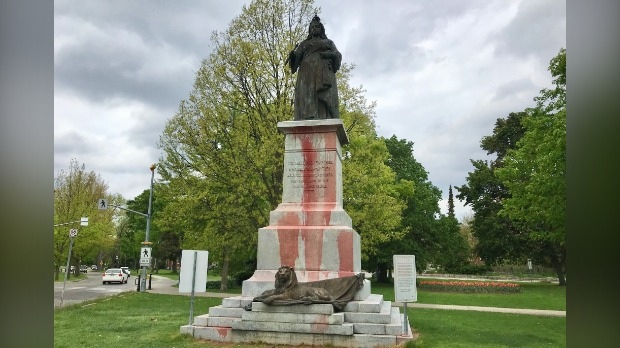 Paint is seen on the Queen Victoria Statue in Victoria Park in Kitchener on May 25, 2022. (Dan Lauckner/CTV News)

Nine days after city crews cleaned the latest dumping of paint off the Queen Victoria statue in Kitchener, the base of the monument is once again covered in red.

The new paint could be seen on the statue on Wednesday May 25. It’s unclear when it was put there, but the statue was paint-free on Victoria Day, Monday May 23.

In an email, a spokesperson for the City of Kitchener said the statue will be "cleaned within a few days per the city's normal practice."

The city previously told CTV News the last time it cleaned paint off the statue on May 16, it cost $5,000.

On Wednesday, the city highlighted that staff plan to bring a report to council in June "looking to continue a community dialogue about the Queen Victoria statue and the impact of colonial statues in public places."

This is the fourth time the controversial statue in Victoria Park has been vandalized in the past year.

Some people in the park on Wednesday said it may be time to take it down.

“I think there's a lot for us to answer for in the way Indigenous peoples have been treated in the past and I think this is part of that story and it’s a reminder,” said one person. “I don't find [the paint] offensive, but I think it's going to be a perpetual problem. Honestly I think it’s time for that statue to come down.”

“I think all of the statues are frankly an eyesore and we should get rid of them all,” said another person in the park. “No one really asked for them.”

On May 5, following an incident that coincided with the National Day of Awareness for Missing and Murdered Indigenous Women and Girls, the city said it said it would not remove the paint “for the time being.”

Eleven days later, the paint was cleaned off and the city promised a report was coming to council in June “to begin a community dialogue about the Queen Victoria statue which emphasizes voices of the local Indigenous communities.”

Multiple calls have been made to remove the statue and rename the park due to its connection to Canada’s colonialist past, particularly in the wake of hundreds of unmarked graves being found at former residential schools across the county last summer.

"We're idolizing these colonial figures that built this country off of the backs and blood of Indigenous people and Black folks as well," Amy Smoke, co-founder of Land Back Camp and a member of Mohawk Nation, Turtle Clan from the Six Nations of the Grand River told CTV News on Monday.

Smoke said they didn’t know any Indigenous people who had been consulted nor notified before the paint was removed on May 16.